And so to the opera. I have been to see 'The Pirates' by Stephen Storace, an opera for which the term 'rarely produced' seems rather inadequate; this was apparently the first time it had been seen for two hundred years. I liked it a lot, although that may have been because in reducing the running time by fifty percent for the benefit of cast, musicians and audience alike the artistic director of the company presumably kept all the best bits and lost the filler. He did however also seem to lose the pirates themselves because despite paying very close attention I couldn't work out where they were. True, a customs officer arrived at the end and arrested the wicked uncle, but beyond the common operatic crime of standing in the way of young love it wasn't clear what for; and surely the customs catch smugglers not pirates as a rule. 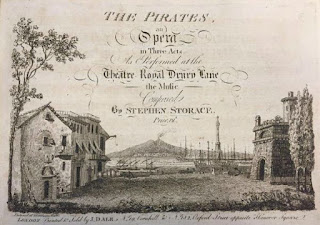 What was left was a tale of young woman unsuitably betrothed by her guardian, with her maid and her true love's valet conspiring to bring them back together and finding each other along the way. If it all sounds vaguely like the story of, for example, 'The Barber of Seville', that's because it is. Perhaps the missing bits pushed back the narrative boundaries of eighteenth century comic opera, perhaps they didn't. Anyway, not only did Storace (the pronunciation of whose name seems a matter of dispute; he was born in London, but I'm going with an Italian flourish to last two syllables) meet Mozart, but his sister Nancy Storace was the soprano for whom the role of Susanna in 'The Marriage of Figaro' was created, so there is an element of family entitlement to that sort of plot.

Highly recommended, but the run has finished, so you'll need to come back in the early twenty third century.
Posted by Epictetus at 18:58