"I love traditional instruments, though of course they are anachronisms. Satellites run around our planet, but we still play bassoons. It's ridiculous!"


One of the drawbacks of cultural pretension is that on occasion one's bluff is called. A new acquaintance of mine suggested that I was just the sort of chap to enjoy the lunchtime concerts at the Leeds College of Music. I could hardly refuse without giving the game away, especially when it was explained that entry was free, and by the time she mentioned a bassoon quartet - which would apparently be 'fun' - it was too late to back out. Admittedly at that point I naively assumed that description meant something along the lines of three stringed instruments plus a bassoon. But no, what it meant was four of the bastards all in one place at one time. Why? Who on earth thought that was a good idea? One plausible explanation is that they have to play together because no one else will play with them; and now that I've written that down I realise it sounds very much like every group of wargamers from H.G. Wells onwards.

Speaking of which, I have not yet posted how the Seven Years War pontoon bridge game ended. Well, we won, but without honour. It wasn't a terribly good game overall, but had some interesting moments. My own favourite - which I'm sure other rule sets could achieve as well, but is the sort of thing at which Piquet excels - involved a unit of Prussian infantry marching into contact with a Russian battery. The guns obviously fired, but achieved nothing; the infantry shot at point blank range, but caused no hits; the guns reloaded and shot again; the Prussians fired several times with no result. We - James and I role playing as incompetent Prussian generals - missed a chance to melee because we were focused on a nearby cavalry fight that was going badly, and in the end the Russians calmly limbered up and rode off unscathed. It rather summed up the game.

Anyway, back to the flatulent woodwind. The Genovia Quartet, for it was they, turned out to be not only younger, better looking and more female than any wargamers that I have ever met, but also very talented. I'm not saying that it didn't occasionally sound like halls of residence the morning after eight pints and a vindaloo, but they kept that element to a minimum as they puffed their way through a programme ranging from Mozart via tango and thirties jazz to a specially composed piece that - assuming I understood the charming Spanish lady's accent correctly - was about a hypothetical duck. I both enjoyed it and wondered what it would have sounded like with a different mix of instruments; well, with any mix of instruments at all really.

"The wind
Tempestuous clarion, with heavy cry
Came bluntly thundering, more terrible
Than the revenge of music on bassoons"

Sadly I have no photos of either game or concert, so here is one of my ceiling: 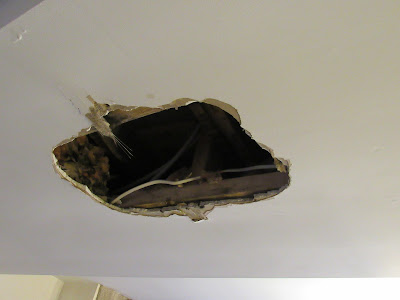 And here is a pre-season warm up of asparagus, buckwheat pancakes and poached eggs: 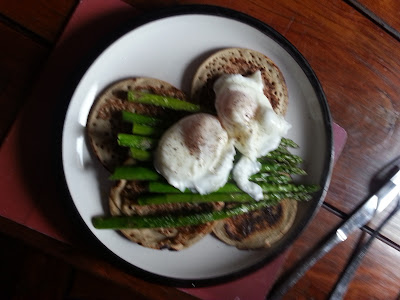