Test of Resolve - the unboxing

Even in a world where one can't actually play any games, one can't own too many rule sets. In my case that goes double for Wars of the Roses rules. I have therefore acquired the newly published 'Test of Resolve' and given them the once over. Should I ever get to try them out I shall publish a more considered review, but they are currently fourth in the queue, and I'm an old man, so who knows. 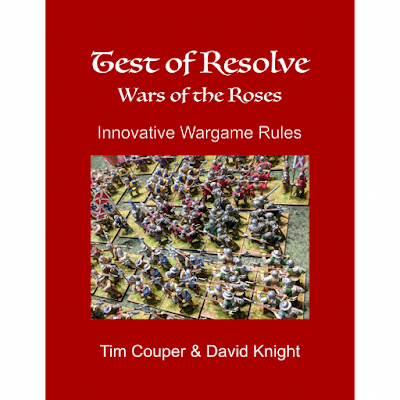 They are perfect bound with 92 annoyingly sized pages plus covers, of which the rules proper take up some fifty or so, including three pages defined as optional. Half a dozen of the pages are the cards which drive the game and which need to be cut out or copied. Alternatively they offer a playing card style deck and I bought those. They are print-on-demand, which is fine, and done by Amazon, which I'm less keen on. They look well laid out; in particular they are replete with foot notes which provide cross-references for where terms are used in a different place to where they are defined. There are a couple of colour photos of figures, but nothing excessive. The diagrams illustrating how units are move, melee etc are clear enough. They look a bit like the units are represented by different coloured and sized Lego blocks, which is an interesting thought. I don't know the authors, but recognise Tim Couper's name from various Piquet forums and the influence of that set is apparent, primarily of course in being card-driven. The cards here form a single deck, but half red and half white; broadly speaking the Lancastrians act on the former and the Yorkists on the latter. It's a bit more sophisticated than that, but you get the gist. They claim to only require one D12 per side, so bucket-of-dice they ain't. I'd need to play them through to tell you how that works in practice. 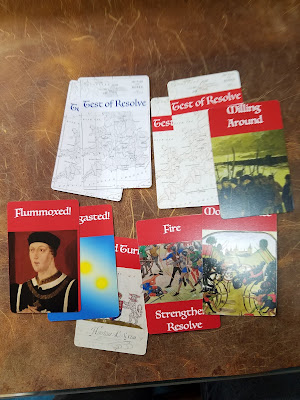 I suggest that we can split the problems with gaming the Wars of the Roses into two parts: the macro and the micro. By macro, I mean all the politics, family feuds, revenge, treachery, misunderstanding etc. For those who like that sort of thing, there are rules for unreliable commanders and potential unexpected events, including the splendidly named 'Mind the Gap' event. By micro, I mean that no one (N.B. I mean no one at all) actually knows how the forces were structured on the day or what tactics they used. One of the things I always look for in a new set of WotR rules is how they have addressed the concept of mixed bill and bow units. The authors make a bold claim: "Archer behaviour in this period is quite well understood". Their interpretation of this 'understanding' appears to tally with that of Dr Lewis, whose book I reviewed recently, although they don't seem to share any of his other theories. (For those who haven't read enough poor reviews of the book in question, there is another in the current issue of Miniature Wargames.) They do however appear to share one view held by another dubious 'expert' i.e. me. I'm not speaking of the idea that the soldiers were all drunk, because why else would they put themselves through it - although I stand by that one - but rather the one about the big men seeking each other out on the battlefield. I've always thought - be warned that I offer no evidence whatsoever in support of this theory - that, given that the wars were kill or be killed for those at the top, then what I would have done if I were Edward IV for example is to gather all my heavily armed and armoured, professionally trained men-at-arms around me and go looking for the Earl of Warwick, and visa versa. As far as I can see, the rules encourage, indeed in certain circumstances force, you to to do that. Kudos.

To be continued, peradventure...

Email ThisBlogThis!Share to TwitterShare to FacebookShare to Pinterest
Labels: Miniature Wargames, Piquet, Test of Resolve, Wars of the Roses