The Yarkshire Gamer has announced the end of the golden age of wargames blogs, although I can't help noticing that he did so via a wargames blog. Rest assured that this blog will continue its proud record of publishing top-notch, wargame-related stuff every single day and often even more frequently. And that, dear readers, is an aspiration rather than a promise.

So, I haven't been here for a while; what's been happening in my life? Not wargaming, that's for sure. I think I mentioned that I had bought a pressure washer. I have been dodging the showers and trying it out. I had never done any jet/pressure/power washing before and was interested to discover that it is a metaphor for life itself: everything is a complete mess and at the end you stand back and ask yourself "Is that all I've achieved?". 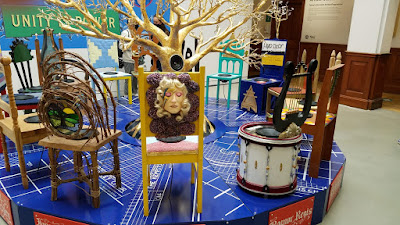 On a brighter note, cultural activities have resumed. In my capacity as a man-about-town I was invited to a reception to mark the reopening of the Tetley Gallery in Leeds city centre, a very pleasant Art Deco building which was formerly the offices for the brewery. The current exhibition is by Mel Brimfield and is entitled "From This World, To That Which Is To Come", a quote from "The Pilgrim's Progress". The artist gave a talk, but as she did so whilst wearing a mask I am unable to tell you what she said. The piece above was singing to me whilst I was taking the photo (N.B. this is very different to the idea of it 'speaking to me', which it most certainly did not) and is, I believe, about the concept that our mental and emotional health would be better if we would only all help one another; amen to that. The best piece was a cartoon which suggested that the Adventures of Tintin were the delusions of a psychiatric in-patient, that Professor Calculus was his doctor, and that Snowy was in fact his pillow rather than his dog. All of which makes more sense than the books.

I have also been to my first gig in over a year, the great Martin Simpson. I have of course seen him many times before, which I think helped to bridge that gap and make it seem like just another concert. Not so for him, I think. It was his first appearance in a long time and he said that it was impossible for him to express what it meant for him to be on stage again, "reminding myself of who I am" as he put it. He played the usual mix of originals, traditional songs and covers, including songs by: John Prine - sadly lost to Covid last year; Dylan - eighty in a couple of days; and this one from Robb Johnson - my old comrade from days gone by.