It's back to the fifteenth century for a review of Hussite Warfare by Alexander Querengässer, which first came out in German in 2015 and was followed by an English version a couple of years ago. 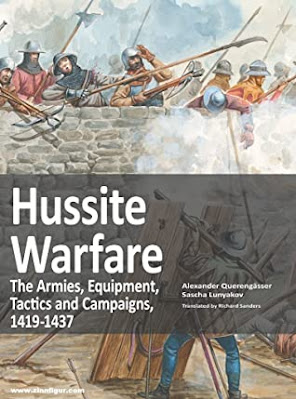 I say that it is in English, but it's not English as we know it, Jim. Still, lets start with the good bits. The pictures are excellent, especially the newly commissioned illustrations - by Sascha Lunyakov - and the reproductions from contemporary manuscripts. But the text has been translated and proof read by someone with no grasp of idiomatic English whatsoever, rendering large chunks of it unreadable. My guess is that it was done by a bored teenager on work experience armed only with Google Translate or similar.
The subtitle of the book is 'Armies, Equipment, Tactics and Campaigns' and it is the last of those elements which really suffers. The narrative arc of a campaign description would seem to require a greater fluency than is on offer here. The other sections aren't so badly affected and contain some good stuff, of which I'll pick out just two bits here:
Firstly, the goose controversy. It used to be accepted that the Hussites used the goose as a symbol on their standards because that word in Czech is similar to the name of Jan Huss. It then became accepted that it was the Hussite's opponents who used the goose symbol as a way of abusing the heretics because the word in Czech etc etc. This book has a number of contemporary illustrations showing Hussite flags including geese, which is interesting. It is, of course, difficult to tell whether the manuscripts from which they were taken were written by supporters or opponents of the Hussites and therefore to draw any firm conclusions either way. I modelled my Hussites when the first view held sway and, following my strict principle of no rework or rebasing, they will continue to proudly display the goose.
Secondly, the Hussites' use of artillery. The book makes it clear that notwithstanding their position as early adopters of gunpowder weapons that they, and indeed their enemies, continued to use more old fashioned siege weapons such as catapults, rams etc alongside them. I have quite a lot of those, plus of course a new castle to try out, so what am I waiting for? Many years ago, long before the blog or the annexe, I put on a game loosely based on the battle of Kutna Hora. I need to re-read the scenario notes.
So, the book is probably only for those with a particular interest and not for the casual reader. As I said before, the illustrations are very good, and sit nicely alongside those in the relevant Osprey as a guide to modelling the period.
Posted by Epictetus at 12:00