In case anyone was counting, the title reflects the fact that, entirely deliberately, there were two separate PotCVIpouri posts. But it has been so long since I was here that you have probably forgotten who I am. Indeed there have been occasions during the last few weeks when I wasn't entirely sure who I was myself. Way back when, we had played the first part of a siege game. I was unavoidable detained elsewhere for the second part, but it did get played. Whilst I obviously can't give any indication of exactly what happened it reached a point where the participants figures that it was simply a question of luck of the dice as to whose morale ran out first and therefore who won. I think the besiegers were being a bit optimistic because, unusually for Piquet, the defenders can carry on after getting down to zero morale and so would inevitably have won. 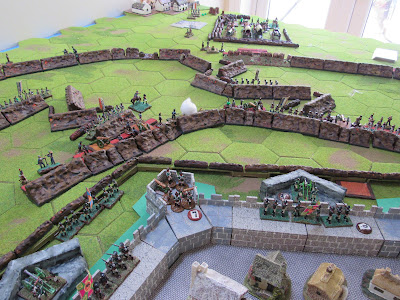 We need a debrief, I feel, to see what worked and what didn't. What is clear, though not unexpected is that the rules work a lot better with more than one player. In the meantime there have been a series of Crusades games using To the Strongest!, although I have been unavoidably absent for most of them so once again I can't report back.

What I can tell you about is the new campaign underway in the annexe, to which I have given the codename "Operation Mouse Poisoning"; it's a fight to the death.