“I know it is wet and the sun is not sunny, but we can have lots of good fun that is funny.” - Dr Seuss

Whilst I have no immediate plans to play C&C Napoleonics - we will be back in the Holy Land this week - I have taken advantage of the traditional British Bank Holiday weather to set up another game. I had decided to create my own scenario both because there weren't any others on the website featuring the forces that I had available to fight the French (Russians and Prussians) and because I have always found the official C&C scenarios to be unbalanced. It is only logical therefore that the historical episode which I chose was part of the battle of Eckmühl on April 22nd 1809, specifically the action between the Bettel Berg and the village of Oberlaichling. This features Austrians - which I don't have - defending against a much larger French and Bavarian force. The Austrians will on this occasion be replaced by Prussians. 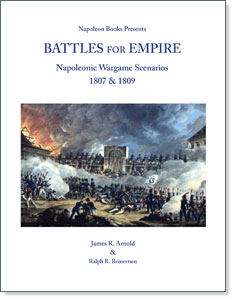 My record on creating scenarios is not good; I have a tendency to over elaborate somewhat. I am hopeful however that by restricting myself to simply translating someone else's scenario for a different ruleset I might have better luck. Thus I have based this entirely on an article in Miniature Wargames in October 2009, which in turn is reproduced from 'Battles for Empire - Napoleonic Wargames Scenarios 1807-1809' by James R. Arnold and Ralph R. Reinertsen, published by Napoleon Books. 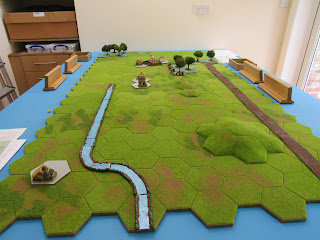 The table layout is straightforward enough. The map is in the proportion 8x5 which translates closely enough into 20 hexes by 12, which is a convenient arrangement of Hexon tiles and is close enough to the C&C Epic playing surface (the latter is 20 x 11 hexes) to not require any rules revisions. It includes a double height hill and some woods defended by fieldworks. Neither appear in C&C, but common sense indicates what their effect would be if they did. 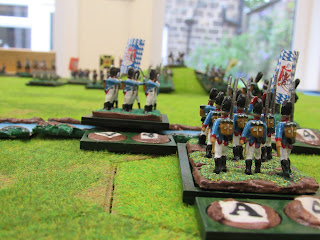 The forces indicated in the article are too big for a C&C game and need to be scaled down. After some thought I decided to take as a starting point the use of all the Bavarian infantry units that I own and make everything else proportional. Further adjustments are needed to reflect the fact that Prussian units are smaller than the Austrians were and, being a mix of front line, reserve and Landwehr, some of them aren't very good. I've also allowed for the fact that in C&C Prussian cavalry units are smaller than the French. I shall probably use plain vanilla combat factors for the Bavarians, with no national characteristics, thereby making them, as they should be, inferior to the French. 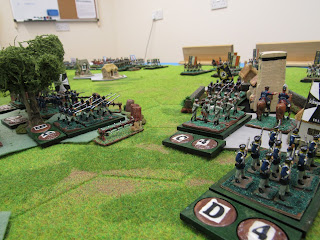 Defining victory conditions is one area that I have always found odd in C&C, particularly the fact that the target number of victory points is always the same for both sides; regular readers may remember this vexed me quite a lot during the Punic Wars campaign we played a few years ago. In this battle Davout's objective was to cut the Eckmühl to Ratisbonne road. The scenario as published mandates the defenders to counterattack against any unit which reaches the road. I think a better alternative is to offer temporary victory points to the French for any unit they can place across the road at the end of a turn. I'm not sure how many; perhaps a bonus for having units contiguous rather than separated.