And so to the opera. Offenbach's Tales of Hoffman was English Touring Opera's third offering last week and very much lived up to its five star reviews. I've no idea whether the original stories by the doomed German Romantic author E.T.A. Hoffman made any sense - it possibly depends how far advanced the syphilis was when he wrote each of them - but they make no sense whatsoever linked together here. That of course does nothing but enhance their suitability for being turned into an opera and also means that the fact that the 1920s Hollywood setting for the framing first and final acts is inconsistent with that for the three tales sandwiched in between is of no importance either. (N.B. for a completely different perspective try the Guardian review.) 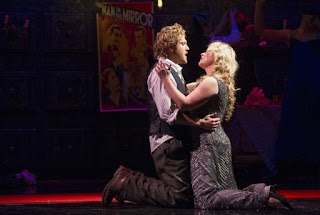 What really makes this production buzz is the highly amusing acting of  Warwick Fye as the various bad guys. And the singing is good as well: from him, from Sam Furness as Hoffman - who really gives it some welly, as a good tenor should - and from Ilona Domnich, as easy on the eye as on the ears. Also excellent is Louise Mott in a number of roles, but it's a mystery as to why, while playing Nicklausse, she is dressed as Billy Bunter. I think I neglected to mention when reviewing Pelléas and Mélisande that Yniold appeared to be dressed as Wee Jimmy Krankie. Someone in ETO's design team seems to have a thing for women in boys' school uniform.