Since my return the demands on my time and energy have been such as to preclude much posting here, but I did manage to tear myself away in order to attend Fiasco yesterday. James put on a refight of Ravenna (scenario details here) which was well received. It is possible that had I read those notes before the game - I was, as I may have mentioned, rather busy - the outcome of the game might have been different, although somehow I doubt it. I acted as sort of adviser/occasional dice roller for someone who had read the rules, but hadn't really followed them and wanted a run through to help him out. I think it did help, despite the handicap of having me misinforming him about strategy, tactics and indeed the rules themselves. In my defence we have recently been playing standard Piquet in various Horse & Musket periods and the last time we played the Italian Wars we used Black Powder. However one looks at it though, things started badly and went downhill from there. In fact my only success of the day was probably finding the Tetley Car Park despite my notoriously bad sense of direction. My unfortunate pupil wasn't the only one to obtain a copy of the rules so they are gradually spreading out to Italian Wars aficionados; just in passing may I mention that one of the guys deep in conversation with James about the period must challenge the chap who used to do Western Desert games on Hessian matting at Derby Worlds as being the tallest wargamer I have ever seen. 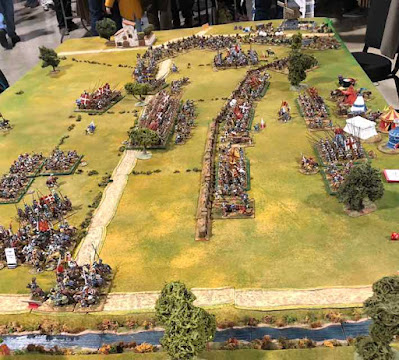 The show was free this year and was, in the morning at least, buzzing. The consensus was that there were a large number of walk up visitors attracted in from those attending the Royal Armouries Museum itself, and if that's true I think we can assume that they would have been less likely to come in if they had to pay £5 or whatever. You never know, some of them might even have picked up a taste for wargaming. One person who was certainly intrigued was the photographer for the national press who was actually there to take pictures of the Spitfire currently in the plaza outside the armouries (which long term readers may remember as hosting many different kinds of re-enactor when I lived in an apartment overlooking it during the early days of my nomadic wanderings), but who was persuaded to visit Fiasco by a wargaming employee of the museum. She - the photographer - looked confused about a lot of things frankly, and had clearly never come across the idea of playing games with toy soldiers before, but was rightly blown away by James' display and took many close up shots with an enormous lens on an expensive looking camera. If they ever appear anywhere they will be worth seeking out; I shall keep you informed. The wargaming armouries employee also seemed to have some ideas for future gaming projects actually among the exhibits; again I shall let you know as soon as I do.
Posted by Epictetus at 14:38