"Table Football is a combination of Soccer and Shish Kebabs." - Mitch Hedberg

It is my practice to every now and then publish a photograph of a bunch of grizzled old men with no accompanying explanation. Here is another one: 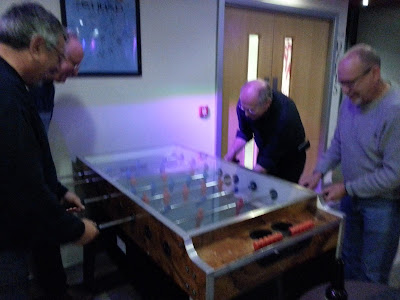 There are herein a couple of coincidences of the type much celebrated by your bloggist, but of no interest whatsoever to anyone else. Firstly, did you know that table football - a game that I really love playing by the way - was invented in its current form in Spain during the civil war, a topic in which I have obviously been immersed for the last couple of weeks while I was there (*). Secondly, one of the chaps in the photo spontaneously and with no prompting brought up (**) the subject of the Gong concert about which I blogged a few weeks ago. He claimed to have 'looked after' me at the time and added a lot of spurious, and - given the length of time that has passed - obviously unreliable, detail about just how unwell I was.


*   There will be no Spanish Civil War project in the annexe; should any Spanish speaking rebels ever appear on the table they will be Mexicans.