"It sounded suspiciously as though the British commander no longer felt himself capable of handling the situation. It being now obvious that in their present bewildered state the British would not start anything for the time being, I decided to pull the net tight by going on to Halfaya."
- Rommel
We were back in the Western Desert, and for once we weren't at Sidi Rezegh; indeed we weren't even in Operation Crusader. We had slipped back six months or so to Operation Battleaxe (I think the second day, June 16th 1941) and were playing on a grand scale using the new to us Sam Mustafa ruleset 'Rommel'. A much shortened section of James' table represented 30km or so of the Libya-Egypt border, from the Hafid ridge to Sollum on the Mediterranean coast. 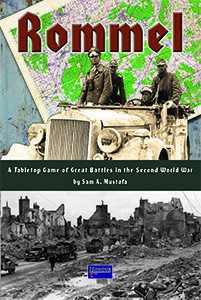 Peter was absent doing some horse-whispering, so I took the Germans, James the British and Mark umpired in the "Don't ask me, I've only read the rules once myself" stylee that I myself frequently adopt in the annexe. Initial overall impression: it was OK. Clearly this was just a test game, so we shall reset it and play again next week, hopefully with a bit more fluency and control.
It's a high-level, gridded game, and seemed to me to be very abstract and boardgame like. Obviously that doesn't mean it won't either be fun to play or that the narrative arc of the game can't match one's expectations of the period. What I am really getting at is that the mechanics themselves are only superficially thematic. It's a action point type game - as an aside, Mustafa's choice of terminology is really irritating throughout - where those points are spent in moving, fighting etc, but also in playing cards from one's hand which add to one's own abilities or detract from the enemy's. These might read, for example, 'Air Strike', but it would be used simply to give a boost to one's dice roll, not because the circumstances especially favour that manoeuvre over another. One might quite as happily have played 'Reserve Artillery' instead.
I don't want to sound too negative though. I very much enjoy all sorts of board games whose theme is so thin as to be transparent. In this case I am certain that there will be many subtleties of card play and action point management, which will make for an enjoyable and challenging game. For our first outing we were clearly just doing things to see how they worked, and in subsequent games will certainly be more cagey, which will probably result in a more 'realistic' outcome; provide your own definition of what that actually means. My experiments worked the better on the night, particularly a nifty thrust through the British lines towards their supply dump, forcing the retreat of their armour to defend it. James tried the strategy of expending most of his action points in defence, only to twice roll badly when trying to replace them for his offensive turn. I think there is a lesson to be learned there.
Update: Mark has posted some photos here.
Posted by Epictetus at 11:30