It's been a thin time hobby-wise recently, but there has been a low level of background activity going on, most of which can be seen in the photo below. 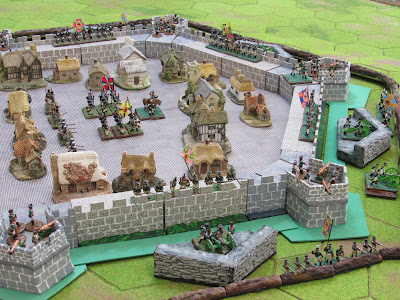 I've added two extra bastions on the table edge, originally to ensure that all the walls were flanked by two sets of fortress guns. In the last run-through I found that I had to restrict the besiegers to attacking the front two walls in order to avoid them having an entirely artificial advantage. Increasing the number of bastions may also make the game go more quickly, due to the way that the forces are built up in the rules. I shall return to this shortly, or if not shortly then at least eventually.

The other new additions are the ravelins now shielding the walls. I have taken quite a liberty with historical accuracy with these, in the interests of fitting everything in to the space available. They should be at a much sharper angle, but to reflect that, and to also allow them to contain my existing artillery bases, would mean their footprint, and therefore that of the covered way, extending way out; which in turn would push the first parallel back off the table. Near enough is good enough.

Let's have a song on that theme from the aptly named 'Dodgy':