The dull roots of face-to-face wargaming could soon be stirred by the spring rain of antibodies in the bloodstream; or, equally possibly, June may turn out to be the cruellest month. While we wait, the warm weather has meant that there has been nothing happening in the annexe. The newly expanded and manned fort still awaits the attacking force to form up outside it. I have however read another book. 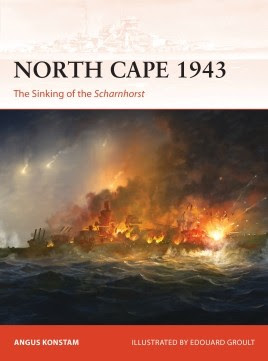 The Imperial War Museum recently posted a short video on their YouTube channel about the sinking of the Scharnhorst, which understandably enough focussed on the role played by HMS Belfast. I didn't previously know much (anything at all really) about the action and a quick search showed that Osprey had published a book written by Angus Konstam on the subject late last year. The standard Osprey format actually suits WWII naval battles rather well: there are a limited number of participants doing a finite number of things over a short period, and the reader doesn't end up feeling that important information has had to be omitted for the sake of space.

I found it a good read and can recommend it should anyone else find themselves suddenly struck by this fairly niche interest. It is lavishly illustrated, as you would expect, with illustrations, photographs and maps. Regarding the last, I suffered my usual confusion when studying them, but strongly suspect that is due to my well-known problems with spatial awareness rather than any inherent fault in the book. The usual proof-reading problems that plague books on military history are present, but in a fairly small way. The Royal Navy divided the ships involved in the operation into two groups, rather imaginatively designated Force 1 and Force 2. On a number of occasions the text reads Force 1 when from the context it is quite clearly referring to Force 2; so clearly in fact that it doesn't present any real problems. And you would have thought that someone involved in the book's production would have known the difference between a baron and a baronet.