It's time for another book review. It makes a pleasant change to be able to say that this one gets an unequivocal thumbs up. The book in question - "Bloodied Banners: Martial Display on the Medieval Battlefield" by Robert W. Jones - isn't new, having first been published in 2010. I was keen to read it at the time, but was quite a lot less keen on the £50 price tag of the hardback. I have now managed to pick up the paperback for a fraction of that price. 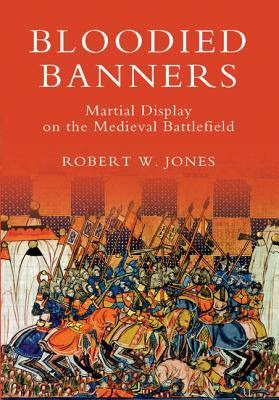 Dr Jones is a historian, for those who set great store by these things, and the book contains footnotes galore referring us to primary and secondary sources, including the full version of translated text in the original language in case anyone wants to challenge his grasp of Norman French. He still manages a lightness of touch though; one of the quotations he uses to introduce each chapter comes from Terry Pratchett. The author covers a pretty full range of visual display: arms and armour are considered alongside heraldry, banners, badges and religious images. He also includes a chapter on aural display: drums, trumpets and the like. I found his approach both comprehensive in scope and nuanced in conclusion. Whilst he is big on psychology and symbolism, he doesn't lose sight of the implications for what warriors of the time actually did in practice. And he doesn't stop there; there are several comments as to where the lingering effects of medieval practice can be seen in the seventeenth century and later.

He begins and ends with the sad tale of Sir John Chandos at Lussac in 1369. Apparently he dismounted and strode alone towards the French proclaiming "I am John Chandos: look at me well and, if God please, we will now put to proof your great deeds of arms which are so renowned". Unfortunately for him he then tripped over his surcoat - on which were emblazoned his coat of arms so that everyone would know it was him who was performing great deeds - and a Frenchman struck him with his lance while he was lying on the ground and killed him. God, presumably, did not so please.