A mere four years ago I wrote of the imminent return of 'Jump or Burn' to the legendary wargames room. Fittingly 'imminent' has proved to be as elastic a time concept as those contained in the rules, but after what has apparently been a whole series of 'Sitting Duck' cards (*) the game has finally arrived; and great fun it is. 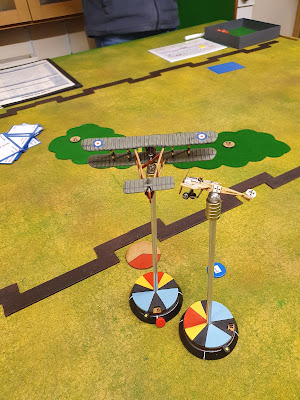 Your bloggist was the German pilot in the above photograph which shows the situation after some excellent manoeuvring on my part. It also shows the situation after some appalling shooting on my part, i.e. I missed from there and the British aircraft carried out its bombing run - that's the target on the ground behind the Bosche front line - and safely dived for its own lines. However, the forgiving nature of this game meant I still got a victory point to carry forward to the next game on the basis that I didn't actually die.

James wrote the rules the best part of twenty years ago and they were published by Piquet Inc (**), although they don't really share much with the rest of that company's games. The main overlap is in combat via opposed polyhedral dice rolls; there are no similarities in turn phasing, initiative management or morale. Having played 'X-Wing' relatively recently it was interesting to compare the different ways they deal with the concepts of simultaneous movement. What this game does is basically not worry about it too much. At the end of a full run of twenty one cards (***) all aircraft will have done (or more precisely, had the opportunity to do) everything their type is allowed to do. It's only at then that one can say that the table reflects their precise positions at a given point in time. In between it's all a bit confusing, which doesn't seem at all unthematic to me. Good stuff.

* On a 'Sitting Duck' card your plane doesn't do anything; depending on what you are flying you will have varying numbers of these amongst the cards that actually allow you move, manoeuvre, change height, fire etc.

** It probably goes without saying that it's unlikely that we are still playing the rules as originally written and published.

*** These cards are played out from three hands of seven. Then they are all shuffled back together and the process starts again.