I haven't written about wargaming for a while, mostly because there hasn't been any. We played an Italian Wars game a couple of weeks ago, but frankly it wasn't very good. Unlike the previous weeks, when we were trying something new, this was a bit unexpected. The rules we were using - whose name escapes me, but will inevitably be something to do with blood - were written by James and Peter quite a few years ago and we'd happily used them on many occasions. In any event the pair of them spent the evening tutting and saying "Of course, we'd never do it like that now". My two pennyworth is that the problem wasn't either the rules or the scenario, but was just a combination of bad luck and player choices. However, I anticipate that a substantial rewrite is on the cards. If I was going to be heretical I'd say that we should just use Black Powder, which has always seemed to me to work quite well for the period. Still, who am I to deny them their fun. As Camus said: "Il faut imaginer sisyphe heureux".

Another endless task has been clearing my tabletop, except for the minor detail that it's now clear and the job is finished. But it did take a long period of not very intensive effort to achieve. I needed to find somewhere to store all the siege stuff, which meant repacking a lot of other things, which meant that every time I turned round there was more piled up on the table than when I started. I forced myself to throw away some pieces of home made, and quite possibly never used, scenery. I shall hopefully be setting up something WWI shortly.

On the plus side, the wind has dropped sufficiently for me to be able to get the spray can out for some priming: 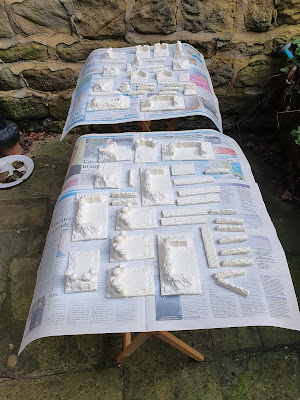