"The vanity of intelligence is that the intelligent man is often more committed to 'one-upping' his opponent than being truthful. When the idea of intelligence, rather than intelligence itself, become the staple, there is no wisdom in it." - Criss Jami

So, not only has the blog gone missing for a while, but even before that the pseudo-intellectual quotient had sadly fallen away. Well today that changes. But I need to warn you that there were some attendees at the two events I am about to describe who were only there with the intention of showing off during the Q&A session; I was shocked , shocked!, to find pretentiousness involved when people met together to discuss Jean-Paul Sartre and Arnold Schoenberg. 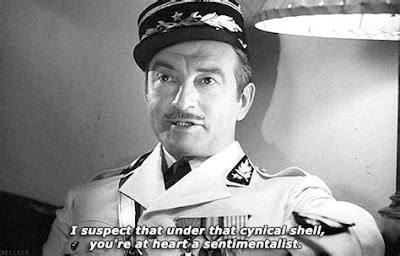 The problem with a talk entitled 'The Existentialism of Sartre' is that even if you find yourself disagreeing with it you also partly suspect that you haven't properly understood it. And yet, the more I listened to the speaker talk about 'Being and Nothingness' the more I came to the conclusion that Sartre didn't know a great deal of mathematics. I find it rather difficult to accept that the lack of something (i.e. nothing) is meaningless unless a human consciousness is pondering its absence. Anyone disagree? What I should have done is what most of those making a point did, which is to start by stating that they hadn't read any Sartre since they were students. Call me a cynic ["You're a cynic!"], but you need to be neither a mathematician or a philosopher to realise that doesn't guarantee that they read any while at university either. I haven't read any Sartre since graduating (*) and I certainly didn't read any while I was there, unless possibly he was reviewing albums for the New Musical Express under a pseudonym. The collective brainpower of a room full of people who forty years ago had existentialism sussed, but had all managed to forget it along the way somewhere eventually came up with the question of what J-P would have made of someone's right to change gender (**). The speaker felt that he would have seen it as a case of essence before existence and therefore been against it. Someone in the audience riposted with Simone de Beauvoir's quote "One is not born, but rather becomes, a woman." and we were left none the wiser.

I learned somewhat more at the Schoenberg, a guided performance of 'Pierrot Lunaire' which was both well planned and executed. The first half was an introduction to the composer, the intellectual milieu of Vienna in 1912, and the original poem by Giraud. There were interviews with the conductor, director and various musicians, although not oddly the singer, who was 'preparing'; who says sopranos are divas? The background to atonality was discussed and there was an interesting, though frankly irrelevant digression into serialism. Questions from the audience were almost subsumed by someone who appeared to be intent on listing every Harrison Birtwistle work he had ever seen (no me neither), but when they came ranged from "Why did sprechstimme disappear after this work was written?" to "What can the collapse of the Austro-Hungarian empire tell us about the UK leaving the European Union (***)?". The answers were along the lines of: it didn't actually, and quite a lot now you mention it.

The second half contained the performance, which was obviously very good in its own terms, but about which I shall only say that I am glad I went along and experienced it - my mind is duly broadened. The staging was simple and effective with the moon of the title being represented by a lantern in a way that wouldn't have been out of place in "A Midsummer Night's Dream". As to what it was about; I'm afraid that I have no idea. There seemed to be a suggestion that despite the part being specifically written for a woman, that the main character is entirely and definitively male; thereby demonstrating that there is nothing  new under the sun. I'm going to say repressed sexuality was involved - the key figure in Vienna at the time was of course Freud - and death - because she did seem to mention it a lot plus it contains episodes called 'Gallows Song' and 'Beheading' - but beyond that you are on your own. One analysis I read said that Pierrot - who may or may not be Pierrot, or a man, or indeed real - ends with no hope of redemption; which gives you some idea of how cheery it was. Schoenberg himself said that it was a mistake to try to work out what it was about, instead one should go home whistling the tunes; I shall interpret that as the famed Germanic sense of humour at work.

*      Actually I have in fact read "The Age of Reason", but to say so rather spoils my line of argument.
**    One of two subjects in the UK at the moment that seem to be obligatory on every agenda of every meeting regardless of what is supposed to be being discussed.
***  And there's the other.