I have been to southern Cumbria for a couple of days, but neglected to take any photos of the Howgills themselves, features which Wainwright described as being like sleeping elephants. However, on my way up there on Monday morning I did take this one of the Ribblehead Viaduct. 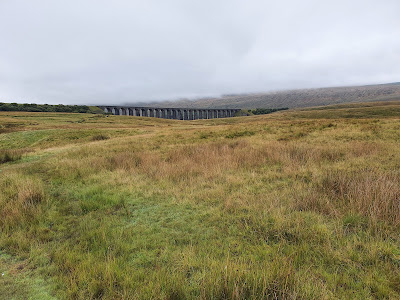 An awful lot of people had obviously decided that an unexpected day off would best be spent by climbing Pen-y-ghent, Ingleborough and Whernside one after the other. Your bloggist was not among them. My companion for the trip and I took a much flatter walk for about a third of the 24 miles that the three peaks challenge requires. Then having done the aforementioned photo-free fell walking north of Sedbergh we paused on the way back to walk around Semer Water 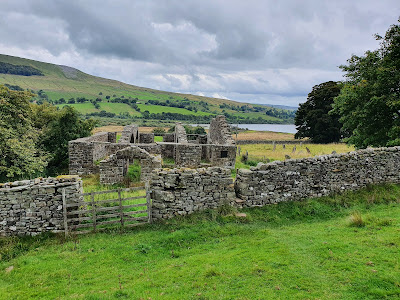 One thing that took me north was the opportunity to stop off in Settle and see Maggie Bell and Dave Kelly perform. They have both featured here before: Dave as part of The Blues Band and Maggie as the lead singer with Stone the Crows, whose videos I have posted on several occasions. I have sometimes mentioned acts I wish I had seen forty years ago; in Maggie Bell's case it was actually fifty years ago. Bell didn't hark back to those days much, although she referenced in passing the band's support slot on Joe Cocker's 'Mad Dogs and Englishmen' tour (sadly neither they nor Freddie King feature in the film). One track she and Kelly did perform was this:

It was well worth the long wait. She may be 77, but she can still belt out the blues.