I was ill for part of last week. Just a heavy cold I think, although to be honest every time I have taken a self-administered Covid test over the last couple of years I have seriously wondered whether I was doing the bloody thing properly. I eased myself back into the land of the living by going to an exhibition of photographs and I shall be easing myself back into the land of blogging by writing about it. 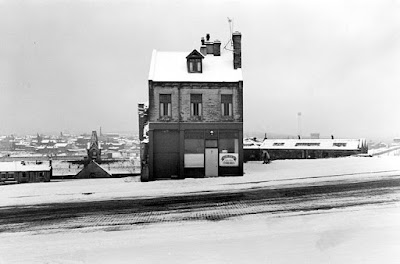 Bradford-born Ian Beesley is currently the subject of a career retrospective exhibition at Salt's Mill. That career started at the same time as I was doing my first degree at Bradford University in the mid 1970s and there was much to bring back memories of the time. I was fortunate enough to be guided round the exhibition by the photographer himself and the background information he provided added greatly to the whole experience. As I'm taking things slowly I shall mention just one of his stories.
In 1997 to celebrate the centenary of becoming a city, Bradford council commissioned Beesley to take portraits of one hundred Bradfordians ranging in age from the newborn to the very old. He went to visit one chap of 104 in a nursing home and the manager said that she was pleased he was there as the individual in question had only had two other visitors all year and they were both foreign gentlemen and so didn't really count as far as she was concerned. After taking the photograph Beesley asked about the other visitors. "Well," came the reply "Bert always visits me when he's in the country". Upon questioning it came out that the old chap had been on the ground staff at Maine Road, and that the Bert in question was Bert Trautmann, the German POW who became Man City goalkeeper and played much of the 1956 FA Cup Final with a broken neck. Rather impressed, Beesely then asked about the other visitor. He, it turned out, had been from the French embassy. The old chap had served on the Western Front and his visitor had come to present him with the Légion d'honneur. I think that story - and the manager's part in it - neatly sums up what's wrong with the attitude of the British to the rest of the world. I'd like to be able to say that things have improved in the last twenty-five years, but we all know that the opposite is true.
Anyway, it's an excellent exhibition, and there's a rather fine Hockney piece currently on the display in the next room as well.
Posted by Epictetus at 14:33