"Whatever happened to the siege you were playing using Lion Rampant?" asked absolutely no one. Well, it fell victim to the double edged sword that is having a dedicated wargames room, or in my case a dedicated wargames outhouse. The great thing about them is that you can leave stuff set up for as long as you like, whereas on the other hand if you are, like me, easily tempted away by other ways of spending your time then out of sight out of mind. Anyway, the other stuff having come to a natural and inevitable conclusion I have returned chastened to the world of toy soldiers vowing never again. 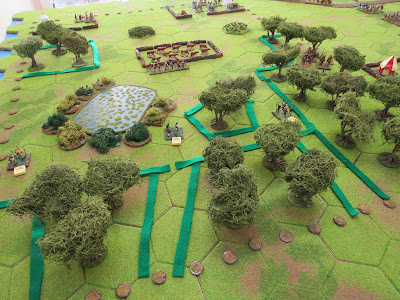 You may recall, although if you do then you're doing better than me, that the game languishing for the last couple of months was an attempt by the defenders to drive off the besiegers' cattle herd. In the photo above the raiders have been successfully guided out of the woods by their local associates, the hunting party is making its way towards them (top right) and those in the camp haven't stirred. The following notes are for my own future reference really: 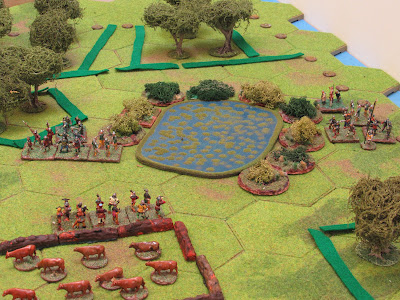 It is now revealed which of the raiding parties are real, which was the blind and also the location of their insipid leader. 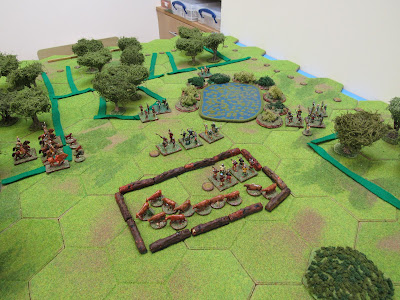 The crossbowmen guarding the herd have been driven back (if I'd changed the courage test properly they may well have been destroyed), but the raiders have to look to their flank as the hunting party emerges from the wood. There are no combat dice for the dogs; perhaps there should be. To win the game, the raiders have to be in contact with the pen at the end of the turn, without any enemy presence. 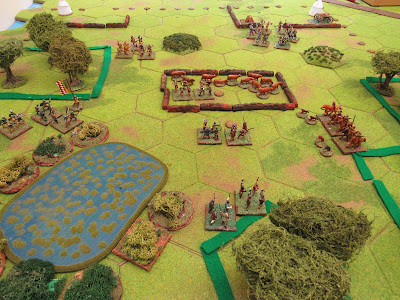 The hunting party charged home, honours were fairly even in the melee, but then they rolled very badly in the courage test and had to retreat. Those in the camp have belatedly started to move forwards. 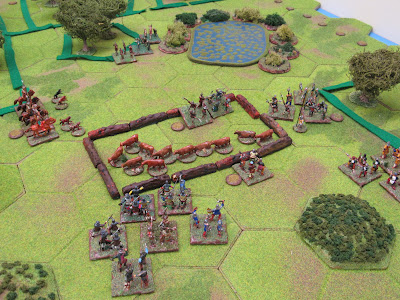 In fact, they have moved so far forward they have reached the pen just in time. This is just as well because the hunting party has had trouble rallying themselves. 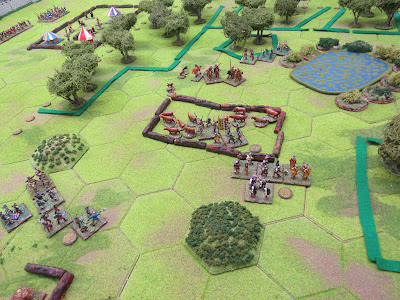 They eventually did so and with a total reversal of their dice rolling they completely wiped out one of the raiding parties, at the cost of once again failing their own courage test. The infantry bottom left are similarly broken and the melee just about to happen will see the same happen to the crossbowmen, whose retreat leaves the raiders having achieved their victory conditions. The defenders in this siege have now won every round.