And so to the cinema. In an attempt to provide some competition in the eagerly awaited Epictetus film of the year award - watch this space - I have been to see 'Bridge of Spies'. It is, as one would expect, a well crafted piece of work without ever really reaching any great heights. Mark Rylance is as excellent as Rudolf Abel (not his real name of course - he was a spy) as he was as Thomas Cromwell. In one sense it's hard to see what he is doing differently from before, but he is as convincing a Soviet spy as he was a Tudor statesman. Tom Hanks is also predictably reliable, albeit perhaps too old for the role. 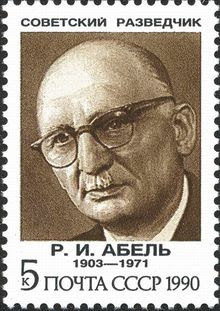 I've no idea how historically accurate it all is, although perhaps one could guess from the fact that the end credits claim that the Soviets never publicly acknowledged Abel as being a spy while the stamp above is one of a series commemorating intelligence agents issued by the, er, Soviet Union. It's at least debatable whether he was any good as a spy or ever uncovered any secrets. As for the message that Spielberg is trying to get across, that's pure Hollywood. He seems to have very little time for the intelligence or moral compass of ordinary Americans - Hank's character aside - but magically when aggregated together the whole country they suddenly become the good guys. Indeed they are so good that they are entitled to behave badly whereas the bad behaviour of the Soviets simply proves that they are the bad guys to start with. I think that it's fair to say that other, possibly more nuanced, interpretations of the Cold War are available. Hanks channels James Stewart throughout and, interestingly, Spielberg chooses to stick to the moral from one of Stewart's best films: "When the legend becomes fact, print the legend". His protagonist's previous connections with the CIA are downplayed so that everything can be portrayed as the ordinary guy running rings round the intelligence services of two superpowers.

It all passes a couple of hours very pleasantly, but the film that they should really make about Abel's life is of his part in Operation Berezino.
Posted by Epictetus at 14:14