“Tame the savageness of man and make gentle the life of this world.”- Aeschylus

Robert Kennedy would have been ninety last month. He famously quoted different words from Aeschylus, his favourite poet - the politicians of today, as I have mentioned before, don't have quite the same heft as those of my youth - when extemporaneously delivering a eulogy to Martin Luther King Jr.; words that would appear on his own tomb a tragically short time afterwards. He also played a key, behind the scenes, role in averting war during the Cuban missile crisis.

I would hope that MPs from all parties will bear in mind his words and actions whilst discharging their responsibilities. 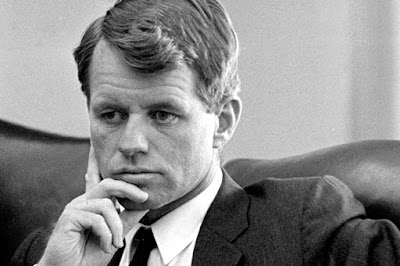 "Are we like the God of the Old Testament, that we in Washington can decide which cities, towns, and hamlets in Vietnam will be destroyed? Do we have to accept that? I don't think we do. I think we can do something about it. "

"We must admit the vanity of our false distinctions among men and learn to find our own advancement in the search for the advancement of all. We must admit in ourselves that our own children’s future cannot be built on the misfortunes of others. We must recognize that this short life can neither be ennobled nor enriched by hatred or revenge."

"I think back to what Camus wrote about the fact that perhaps this world is a world in which children suffer, but we can lessen the number of suffering children, and if you do not do this, then who will do this?"