Say adios to your huevos!

And so to the cinema. I promised myself to watch more films this year and what better place to start than with Quentin Tarantino's latest 'The Hateful Eight'? Even I'm expecting some sort of joke there - and I'm doing the writing - but I'm serious; it was rather good and I thoroughly enjoyed it. The BBFC describe it as containing 'strong bloody violence' and, well, they are spot on. I'd like to suggest that the violence is offset by some sort of moral message, but if it is then it went over my head. I'm not sure that Tarantino does spiritual journeys or redemption, but he does do cracking dialogue and well staged set pieces. And gore. 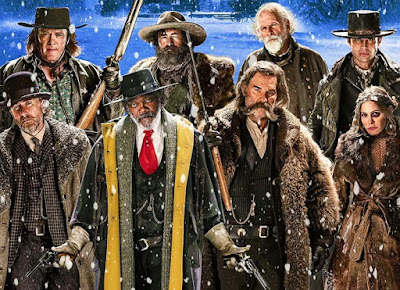 If I have any quibble it is that there is a bit of a hole in the plot regarding the explanation for the absence of the driver of the first stagecoach to arrive at Minnie's Haberdashery. Considering how tightly plotted the rest of it is, with all loose ends tied up by the end (however implausible the tieing up), that does stick out a bit. And if I had a second quibble it would be that for bounty hunters the Major and Ruth seem remarkably ill-informed about people who might have a bounty on their heads. Minor issues though, that don't stop me recommending it to all but the squeamish. 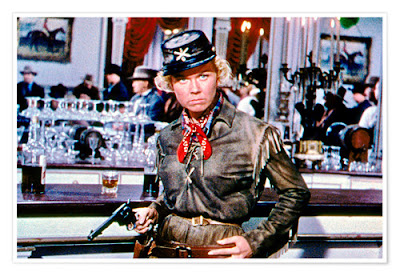 One of Tarantino's trademarks is playing homage to other films and there have been a number of suggested influences bandied about, most notably 'The Thing', which I've never seen and therefore can't comment about, plus the television shows 'Bonanza' and 'The High Chaparral'. I'd like to offer another: 'Calamity Jane'. Fewer songs and more blood perhaps, but I defy you to watch the film and tell me that I'm not right.
Posted by Epictetus at 10:08