For the benefit of overseas readers, the weather in the UK is absolutely glorious and has been so for weeks; a fact which I suspect accounts, along with the occasional domestic accident, for a lack of posting on more than a few blogs, and indeed for the lack of any wargaming to post about in the first place. Nevertheless, the aforementioned smack on the head, seems to have knocked my wargaming mojo back into action and I have been - strictly in the cooler evening hours - spending some time in the annexe. The original driver for this was the threat/promise from the Unquiet Don to repeat his visit of last year, which in turn spurred me to finally buy my own hard copy of To the Strongest!. While flicking through them the rules for warwagons caught my eye and having played about with the implications of them I thought they had enough promise to set up a game. And it's the overexposed square in this photo of the result which explains why I mention the weather: 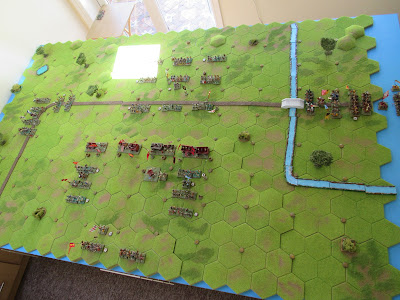 Details of individual battles in the Hussite wars are somewhat hard to come by, but there is at least some agreement on the Battle of Malesov in early June 1424. I have based my deployment on the invaluable booklet on the 1419-1435 period by L.K. Mills. I can't remember where I got it, but if it wasn't from the Lance & Longbow Society stall at a show then I would be very surprised. I shall have a little solo play both to refresh my grasp of the rules as a whole and to see how the scenario works out, after which I shall post again as to why things are the way they are. 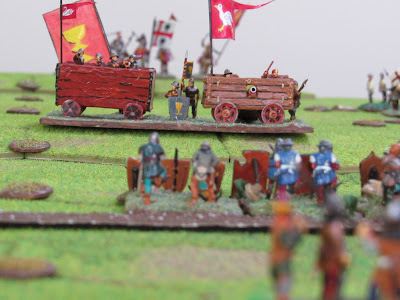 Email ThisBlogThis!Share to TwitterShare to FacebookShare to Pinterest
Labels: Hussites, To the Strongest!, wargaming annexe