It's the end of another month and time to catch up on what's been happening culture wise. However, the sun is shining, and I can't be bothered, and in any case I want to leave room for the joke about two wargamers at a party, should I be in the mood by the time I get to the bottom of the page. Highlights did include a talking bed - ironically in a play about someone whose memory has become unreliable following an accident - plus a chap sitting directly in front of me at an opera unexpectedly rushing the stage and joining in the curtain call. I thought at first that he was an operatic Karl Power, and was kicking myself for never having thought of it myself, but rather boringly he turned out to be the composer. 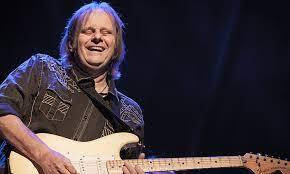 I also want to mention veteran blues guitarist Walter Trout who was excellent. I am a sucker for first hand stories about legends such as B.B. King, Albert King (who apparently wasn't very nice) and John Lee Hooker, and Trout didn't disappoint. He was joined on stage for one number by local legend Chantel MacGregor. I've no idea who arranged for it to happen, but it quickly became apparent that they had never met and that she was seriously in awe of him. However, perhaps buoyed by shouts from the crowd of "Show him, Shanty", she didn't disappoint either and the faces of the band ended up showing both surprise and approval.

I've already mentioned the only film I saw in June, the truly dreadful 2001. Moving on to a real classic, those who, like me, love the La Marseillaise scene from Casablanca (which I have previously posted here in sad circumstances) may find this critical analysis interesting; hat tip to Liberal England for pointing me to it.

There were two wargamers who had been invited to a party. One, not at all confident with women, asks for advice from his friend who had far more success in that field. He is advised to take a large potato and put it down his underpants whereupon, or so he is assured, the women will flock to him. At the party they meet and the giver of the advice asks the recipient how things are going. "Not at all well" comes the reply "They are actually running away from me now." His friend looks him up and down and says "You're supposed to put it down the front."