"I haven't understood a bar of music in my life, but I have felt it." - Igor Stravinsky

And so to the opera. I have been to see 'The Magic Flute', where thankfully the Queen of the Night's famous aria was sung beautifully. This was a new production by Opera North, which I enjoyed somewhat more than I had their previous one. All the performances were exceptional - I don't know whether it was deliberate or serendipity to cast an Irishman as Papageno, but I shall never now be able to think of him as anything else - and yet I still don't really like the opera. I have previous form in telling Mozart that he has got it all wrong and I'm going to do so again. None of it makes any sense. The masonic chaps are obviously meant to be the good guys, but they go round kidnapping and sexually molesting women and inflicting corporal punishment on each other. The Queen of the Night is meant to be the baddie, but doesn't do anything except sing and worry about her daughter, while her acolytes rescue the hero from the clutches of a monster that is about to kill him. It's most peculiar. 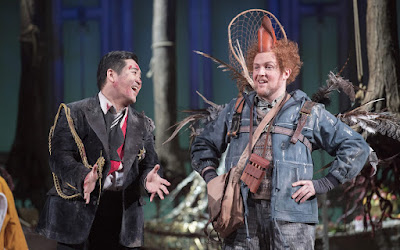 The plot of 'Katya Kabanova' at least makes sense, but is completely implausible whilst paradoxically at the same time being a bit too close to home for comfort. It also has an out of the ordinary operatic villain in the mother-in-law from hell, who was roundly booed at the curtain call. 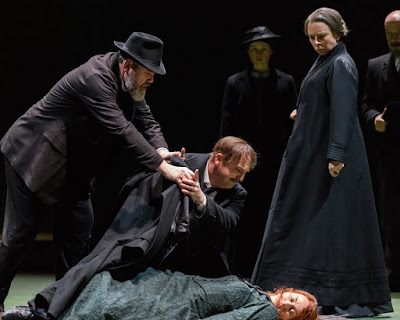 Unpleasant family members feature prominently as well in 'Gianni Scicchi'. I had seen two other productions of this in the last twelve months or so and perhaps that was why this particular one fell a bit flat. In addition there were some strange directorial decisions including the deceased - whose will is the cause of all the trouble - wandering about the stage, and climbing both walls and ropes from time to time despite being dead. 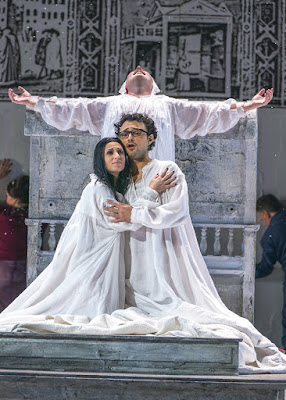 Almost as confusing was an otherwise excellent concert staging of Marc-Antoine Charpentier's rarely performed Baroque work 'David et Jonathas'. That it wasn't acted out, together with the lack of surtitles and the fact that I have no French made it a bit of a struggle to follow what was happening. According to the programme the piece would originally have been intertwined act by act with a prose play in Latin that developed the characters and moved the plot along; maybe that would have helped, or maybe it wouldn't. What certainly wasn't of any assistance was my preconception that the Philistines were in the wrong. It seems that for this particular biblical story it's the Israelites who were being unreasonable; plus ça change, plus c'est la même chose. The role of Jonathan, presumably originally written for a castrato, was played by a soprano and so opera's fine tradition of the leading lady not making it to the end alive was maintained.

Then there was the one that got away. Whilst there is nothing to compare with a fully staged opera supported by a large orchestra I also rather like watching works being performed in a more intimate environment. I therefore travelled across Leeds in the rush hour to see Opera UpClose perform 'La bohème' at the Theatre Royal Wakefield. I got there in plenty of time, bought myself coffee and cake in the pleasant little cafe and was just thinking to myself how civilised it all was when the lights went out. The power never came back on, the show was cancelled and I had to turn round and come home again. The cake was nice though. 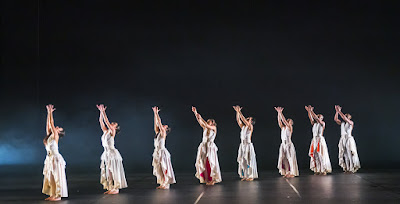 Last, but not least, I have been to see 'The Rite of Spring'. Despite my carefully moulded image as a man of culture I have to confess that I had never previously seen a ballet; I therefore have absolutely nothing to compare this with. I can, however, report that I enjoyed it immensely. The music was loud and powerful (if one is to contrast it with his contemporaries it was less melodic than Puccini, less dissonant than Schoenberg; I was reminded of prog rock, but I'll bet that I was the only one) and there was lots of vigorous and entertaining leaping about on the stage. I had always wondered how the narrative was explained in ballet if there weren't any words. In this case that was rendered moot because there is no story: it is simply a series of pagan mating and fertility rites. It made me wistful for this blog's erstwhile female reader, who always rather liked that sort of thing.
Posted by Epictetus at 11:37