We played out the Amiens scenario and the tanks did indeed advance, but quite slowly. They found hills difficult - entirely consistent with the original battle - and as the defenders kept scoring high on the countdown roll the game finished one turn before they would undoubtedly have secured victory for the British. 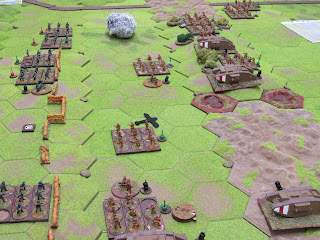 Neither Peter nor James seem to find it intuitive that one could lose the battle but win the game. I must admit that I don't really understand what their problem is; apart from a lot of spurious precision in the totting up of victory points there isn't anything involved that we haven't done before many times with other sets of rules. Anyway, flooding permitting, we are now going back to the legendary wargames room and the Seven Years War for a campaign of James' devising - more details at James' blog; I am commanding the Austro-Russian force - so it may be time to sum up my feelings about Square Bashing so far.

Firstly, the mechanics are straightforward enough and we got a few good games out of it. There seems to be consensus about which bits we would change. In particular ranged fire seems to involve an awful lot of dice rolls for basically no effect. That would seem to imply two alternatives so, based on a natural reluctance not to have any shooting at all, I think we will beef it up a bit. Also up for some tinkering are the pre-game asset rolls, the higher command stuff and aircraft.

More pertinently there is the question as to what it is trying to represent. It is pretty explicit that the forces are a division a side, but - in my opinion at least - divisions didn't fight like that on the Western Front; certainly not in attack. Now believe me I am firmly in the 'game' camp (as opposed to the 'simulation 'camp), but even so one of the reasons for historical wargaming in the first place is to try to reflect the realities and constraints of the time. In addition to that, the more I read I feel more strongly than ever that the best level for gaming the last year or so of the Great War is brigade. You may recall that's what I attempted when messing about with my own 'Blue Guitar' rules at the end of 2017. So, there you go, pick the bones out of that.
Posted by Epictetus at 12:57