I came, I sawmill, I didn't conquer

Hot weather normally sees your bloggist too busy frolicking in the sunshine to post here, but in common with many others I am finding the current spell all a bit much, and have retreated indoors. That gives me a chance to say a few words about the conclusion of the game I mentioned here a couple of weeks ago. I didn't take any photos; James didn't take any photos; in fact no one took any photos, so I have stolen the one below from his original post about the scenario. 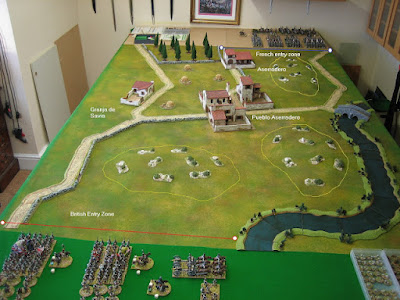 One can't draw any conclusions about the rules from all this; it was simply a sequence of appalling dice rolls. The consensus was that it must have rained and made the powder wet. Although the rain in Spain stays mainly on the plain, on this occasion we can assume it fell on the hill instead. So, we shall have another go this week and try to put into action any conclusions we have drawn from our couple of (or in my case one and a half) games. Back in late 2019 when we first started using Piquet family rules for the Peninsular I wrote that they seemed rather unfair on the French, who always got blown away before making contact with British infantry in line formation. I'd say that the current version leans slightly towards the French. If I understand it all correctly - by no means a given - a French column of attack down to one quarter strength counts the same in melee as a British line with no losses; indeed if it initiates the melee by charging then it has the advantage.

The other question you are no doubt asking yourself is why the battle was over after just one small element of it was resolved? This has to do with James' period specific adjustment to the morale rules. I've never been a fan of the Piquet morale rules, partly because they are not thematic (they are a mishmash of various unrelated things lumped together in a mechanism to determine both when the game ends and who wins), and partly because I could never see why the process for assigning amounts of morale would necessarily deliver the 'correct' result to make the game work well. James' tweak is certainly thematic (although still perched on top of what I regard as a rackety base), but simply means that the question of 'correct' morale levels now applies four or five times as often as it did before.