I Côa, I Saw, I Conquered

Another game has been and gone and would be lost to posterity unless I wrote about it. James called it Coa Constrictor, but I wasn't paying attention so I can't tell you with any confidence why. Presumably it's to do with the river and with the British deployment area being a bit, well, constricted. The table looked nothing much like this: 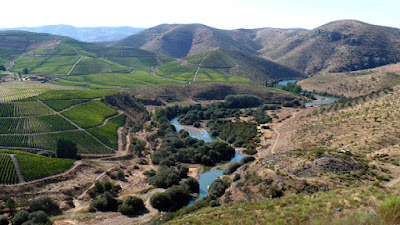 As you will have gathered from the heading, I won this time, when I just managed to achieve my secret victory condition before the wheels fell off. I had had a guess - a wrong guess - at Peter's victory condition and was doing a lot of unnecessary defending. I would never have worked the correct objective out in a month of Sundays because, when revealed, it turned out to be ambitious to the point of impossibility; sensibly enough he was instead trying to win by biffing my forces until they gave up, which they very nearly did.

Even by our standards there was a huge rule change in the middle. Had we played the first night with the rules of the second the French would have won. Had we played the second night with the rules of the first the British would have won by a country mile. I'm not entirely sure we've got it right yet. Anyway, slight gear change and next week will see some siege action in the annexe.