I have been absent. In my absence I have been away. Lots of culture was involved, so watch out for a long boring post about it all. In the meantime here's a photo of one very non-cultural site which previously featured on this blog here. 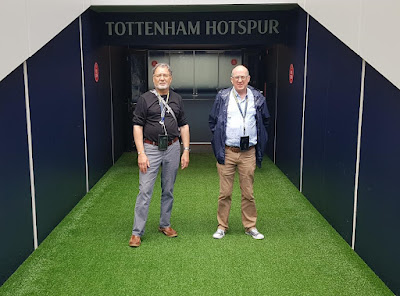 By coincidence I bumped into the same two characters as last time, looking even more grizzled as they came out of the tunnel than they had at the old White Hart Lane. It has to be acknowledged that it's now a very impressive stadium indeed, although it by no means resembles going to the match as I remember it. As if to prove the point we brunched along the Tottenham High Road on organic eggs benedict accompanied by designer sparkling water in an expensively pretentious bottle, the days of several pints and a kebab now being merely a distant memory.

There was no sign of the Costa del Sol Cup.