C&C Napoleonics returned to the annexe for the first time since September 3rd 2019. Could we remember the rules? What do you think? 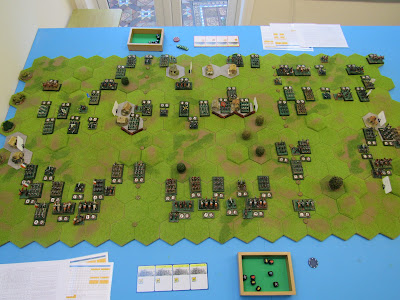 At some point in the last few weeks we had another - and I suspect final for a while - crack at the ancient galley rules. Overall, I think everyone is happy with them. They give a quick, fun, decisive game with multiple players each controlling multiple ships and it all wrapping up in a couple of hours. If I had to search for negatives I would say that the situation where many ships end up locked together and resulting in a mass melee requires an application of wargamers' common sense to make it work. There's nothing wrong with that per se, but it will be difficult to write down and even harder to explain. I don't know if James intends to publish these, so perhaps that point is moot. 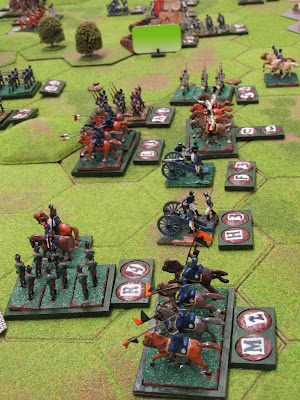 Anyway, back to C&C, which is another game that gives a quick, fun game, all over in an evening. We didn't do too badly with the rules really, our main problem being trying to keep track of all the national characteristics associated with the various units. Having said that, we also got the rules for cavalry vs square badly wrong, but it was the same for both sides. We had a go at the Laon epic scenario from the C&C Napoleonic website using the epic rules from expansion 6 and the tactics cards from expansion 5. I really like the latter in particular; they ensure that plans don't always work as intended and do it in a manner which appeals to me. The French won when the Old Guard stormed through the middle destroying everything in their path. The Prussians being a bit too feisty early on was their undoing. We shall have another go next week: Friedland I think.