How rude so'er the hand

I like getting questions about blog postings, despite them usually being along the lines of "Why do you bother?" or "I suppose you think you're funny?". I am glad to say that I have received one which is marginally more constructive, an observant reader asking why I spelled 'gaily' as 'gayly' in the title of the previous post. Don't blame me, blame Sir Walter Scott. The quote comes from his narrative poem 'The Lady of the Lake'. I haven't read it - Scott is one of those authors who I firmly intend to read when the time is right, but as to when that time might be I can't say - but I have just been to a performance of Rossini's 'La donna del lago'.

I'd never seen it before, and have read various theories as to why it isn't put on more often: either the staging and set requirements are too demanding or it's difficult to assemble the combination of voices needed seem to be the favourites. This production was a bit odd, but the music and singing was excellent and I enjoyed it thoroughly. 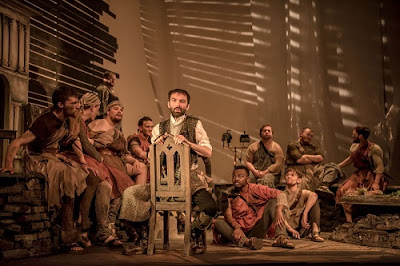 The oddities included archaeologists and museums, neither of which appear to feature in Scott's original and no kilts or tartan, both of which certainly (*) did. The driver of the plot is the apparent real-life tendency of James V to wander around in disguise. He was, of course, the father of Mary Queen of Scots, but if you can guess 16th century from the pictures then you're doing better than me. The chap on the chair is the baddie, who bears the fine Scottish name of Rodrigo, and as whom John Irvin stole the show, brilliantly portraying the character's MacHeath-like psychopathic tendencies. The eponymous lady was wonderfully sung by Máire Flavin, whose Violetta for Opera North this autumn I am very much looking forward to.

* For 'certainly' read 'probably'; hard to know for sure without putting in the effort of actually reading it.