Last year we played some horse and musket siege games in the annexe using 'Vauban's Wars'. It was the publication of those which had led me to laser cut a fortress and take up resin casting in order to make some saps. That was all a bit of a digression from what I was previously doing, which was using the laser cutter to make myself a modular castle and some town walls. That in turn had been driven to some extent by having owned models of medieval siege equipment for years and never really having got them on to the table. 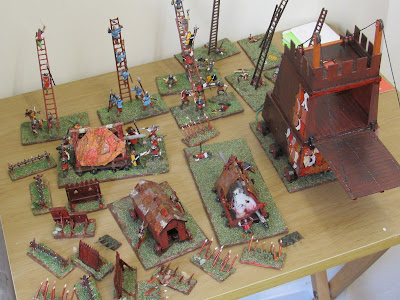 My attention was therefore caught by an article by David Hiscocks in the July issue of Miniature Wargames entitled Lion Rampart, described as a siege campaign for Osprey's 'Lion Rampant' rules. I had briefly thought about trying to rejig VW for an earlier period, but had abandoned the idea as those rules are definitely written for the age of a structured and scientific approach to siege warfare. However, having read and played them was good background to reading this article because I could see how he was attacking the same challenge, but had come up with a very different approach. I was sufficiently impressed to think about trying it out. I've had a bit of a play around and have come up with the following: 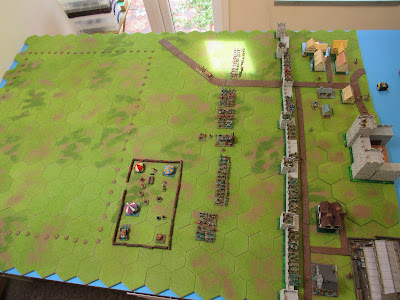 I'll do another post as to how I ended up with that layout and what the marked off area is all about. Note that the sun is still shining in West Yorkshire despite it being late July. 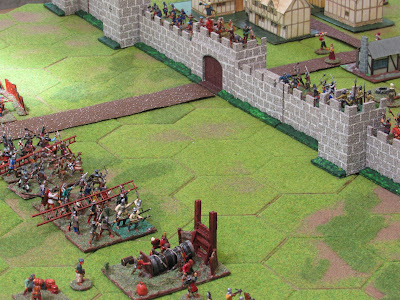 Don't enquire too closely into the period or the place; let's just say late medieval, somewhere in Western Europe.