We played the second half of our initial Soldiers of Napoleon game last night. I don't own a copy of the rules, but both James and Mark do. When I arrived they were both observing that they had re-read them since the previous Wednesday and were engaging in mutual congratulations as to how we had got absolutely everything correct despite it being the first game. Now, one doesn't have to be as big a cynic as me to realise that this was all a bit of a hostage to fortune. Inevitably enough, a series of errors became steadily apparent throughout the evening: saving throws against artillery (there aren't any), what happens when you fail to pass a morale test to charge home (you fire instead, which I rather liked without being able to justify it thematically), the way reserves arrive (not intuitive at all, but makes sense once we'd bothered to read it), and too many others to mention. In the end we called it a draw and decided to start again next week. Mark and I had nearly won by then by throwing everything into a cheesy attempt to achieve one of our hidden objective cards and accept that quite a few units would evaporate in the process. It came down to the need to throw a 4,5 or 6. I threw a 2. 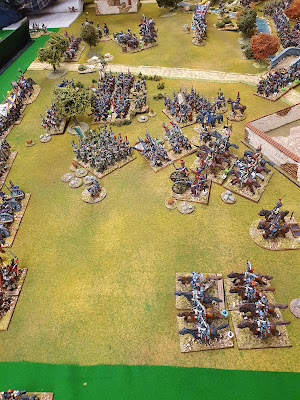 James wondered whether the rules had been written around how the playtesting group played the game rather than it being fully thought through as to how anyone picking them up cold would do it, which I thought was quite astute. But, having said that, we all changed our approach over the two evenings and no doubt will do so even more next week. We're going to try the big battle rules - main difference apparently being that each player has their own hand of cards - and use a larger playing area. I hope we drop the 'How Goes the Day?' bit, because it's pants; not the idea as such, just the manifestation of it.