And I'm not talking about the weather which, at nineteen degrees and raining, is about par for high summer in a normal year in the lower Wharfe valley. Last night there was a full turnout in the legendary wargames room: Peter (*), James (**), Mark (***) and me. We had a first game of 'Soldiers of Napoleon', a new set of rules which are creating a bit of a buzz. 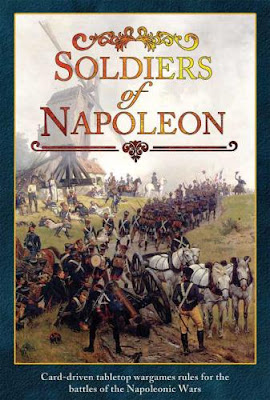 And the verdict: they were all right. I got the impression that the others were more enthusiastic than I was, but it all has to be interpreted in the context of us almost certainly not playing them correctly on this first occasion. I like a card driven game, so that aspect was good. It uses a system whereby each card can be used in a variety of ways, but only one can be chosen each time you play it. It's a very common mechanism in boardgaming, but I'm not sure whether I've ever come across it in wargaming before. I also quite liked the relatively simple idea it uses to encourage one to switch successive activations from one command to another. Combat resolution seemed very bland and I was bemused by artillery being so underpowered and vulnerable on a Naploeonic battlefield. The biggest disappointment was the much vaunted 'How goes the day?' concept of one playing a small section of a larger battle with what happens elsewhere affecting what's happening in your sector. All it actually amounts to is rolling dice every turn and the winner getting some victory points. 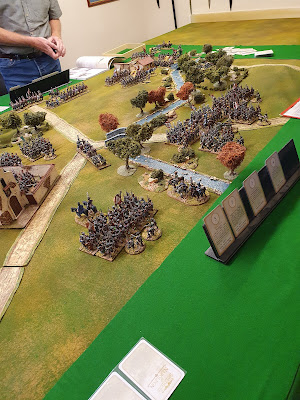 We shall carry on next week, with the biggest challenge being to stop James introducing house rules before we've even finished the first game.

* Who I'm very pleased to say looked well after an unavoidable absence.

** Who seemed a bit out of sorts; perhaps it was the heat.

*** Who was wearing shorts. I know one can't expect everyone to live up to my standards - I always wargame in a tie and sleeveless sweater - but really!