I broke my recent wargaming fast in the form of the first evening of a refight of Salamanca. I wasn't at all familiar with the battle before, but if I've understood it correctly we're playing the part of the battlefield where the main fighting occurred and the British are not constrained by having to follow Wellington's plan. The main change to the rules in my absence seemed to be to do with infantry melees. The changes sounded interesting - I thought I detected some Black Powder DNA - but we managed not to have any infantry melees so I can't really comment. I'm on the French team and all is not going well on my side of the battlefield, although my reinforcements are about to rush out of the woods, so perhaps there's hope yet.

My knowledge of Salamanca is infinitely greater than my knowledge of Elchingen, of which I had never heard before Mark invited me round to try some DBN. Even now, I couldn't tell you much more than that it involved Austrians and French. We played it through twice, swapping sides, and the Austrians won narrowly each time. 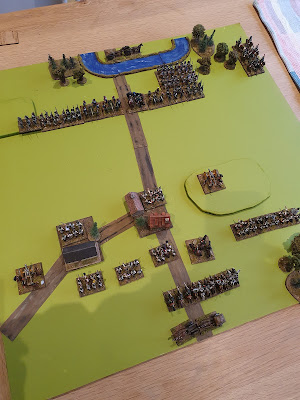 It wasn't just my first time with DBN, it was the first occasion that I had ever played any of the DB family of rules. I have to say that I rather enjoyed it. The game was much as Mark had described it: entertaining and quick. One of the things I wondered about in advance was how it would compare to C&C Napoleonics. The best point of reference is the basic C&C game rather than the expanded EPIC version that I would play in the annexe, and despite very different mechanisms there seemed to me to be similarities. They are both easy to grasp and play, avoid minutiae, but yet have sufficient chrome (e.g. unit types, national differences) to render the period recognisable. Indeed they share the same fault, namely that because victory depends on destroying a certain number of enemy units it can all get a bit cheesy at the end when on is chasing the final elimination.

A very pleasant way to spend a couple of hours.