The actor Daniel Craig featured in the previous post. Twenty years ago he played Guy Crouchback in Channel 4's adaptation of Evelyn Waugh's 'Sword of Honour' trilogy. The book documents Crouchback's war, which paralleled Waugh's own in many respects, and has a large cast who I've always assumed were modelled on, or amalgams of, real people. Indeed I have already written about one probable source for Brigadier Ritchie Hook. I have just come across another example. 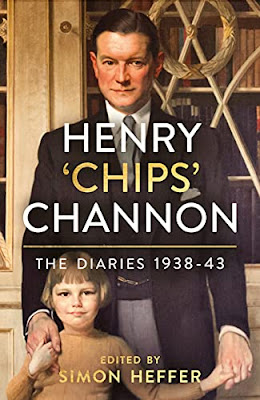 I have been reading the second volume of the diaries of Henry 'Chips' Channon. Now, don't judge me. Channon was clearly an appalling human being: shallow, snobbish, hypocritical, anti-semitic, a Tory MP - I could go on. (By the way the child in the picture is Paul Channon, who went on to become a cabinet minister under Thatcher). However, I got the book very cheaply, and that's not to be sniffed at. And the years covered are 1938 to 1943, so I thought it would be interesting to see how the events of those years were viewed at the time. As with Charles Repington's diaries from the Great War which I read earlier this year it becomes clear that many of them aren't viewed as being worth mentioning. Repington never writes about the Easter Rising or the Russian Revolution and Channon doesn't regard the battle of Stalingrad as being worth even alluding to in passing. The main amusement in Channon's case is just how wrong he was about so many things. Not merely that he was an arch-appeaser (*), but that his tips for high political office - including himself - inevitably get sacked shortly afterwards, never to rise again. At one point he predicts the imminent restoration of the monarchy in Germany, which even without the benefit of hindsight does seem as if he's been smoking something.

Waugh's novel contains a character called Lieutenant Padfield, the 'Loot', an American social phenomenon who is everywhere and knows everyone. Channon's diaries feature the 'Sarge', one Stuart Preston, who is attached to Eisenhower's HQ in some unspecified capacity, knows everyone and is at every social function. The real Preston, who went on to be art critic of the New York Times, is now understood to have been working in counter-intelligence, with the task of infiltrating high society to identify sources of indiscreet gossip; if Channon is to be believed he did so in a very hands on manner. Waugh's 'Loot' turns out to be spying one of the major characters on behalf of a firm of US lawyers, so perhaps Waugh (**), and therefore presumably everyone else as well, was fully aware of what the 'Sarge' was up to.

* After the Germans occupy the whole of Czechoslovakia in contravention of the Munich agreement, he observes that Hitler doesn't make life easy for his friends.

** Who also appears in Channon's diaries; Chips is not a fan.