Stoptober is all about giving up smoking, but I seem to have given up wargaming for the month instead. No particular reason, just the usual real life stuff getting in the way (*). Nothing particularly bad, although I had an injection in one of my legs at one point, which apart from being painful in itself left me rather immobile for a couple of days. Anyway, before the Rhetorical Pedant puts in an appearance let me acknowledge that I had a relapse mid-month, when I played out the game that had been sitting on the table in the annexe for quite a while. And that's where we pick it up again in November. Having lost a significant part of their food supply, and of course aware that help has been sent for, the besiegers have no option but to launch an assault. 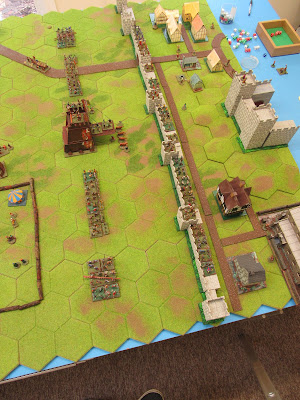 One driver for playing this was to get some of my siege equipment on to the table, but due to the defenders feistiness the only one that has made it is the siege tower. 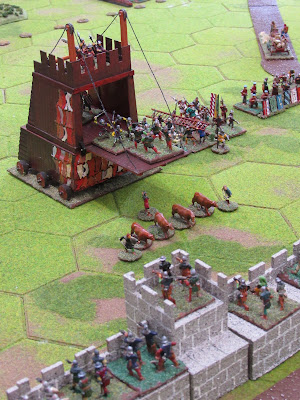 When I first read the 'Vauban's Wars' rules for 18th century sieges I had a think about whether they could be amended for the medieval period, before deciding that they probably couldn't. The little campaign from Miniature Wargames that I have been playing has been fine, but perhaps a little over-simplistic. I like the fact that there will definitely be a final assault, but would have welcomed a bit more to and fro between besieger and defender in the run up to it. For example, the besieger's bombard never got a look in. Maybe some of the relevant elements in VW - food, spies, disease all spring to mind - could be usefully incorporated. 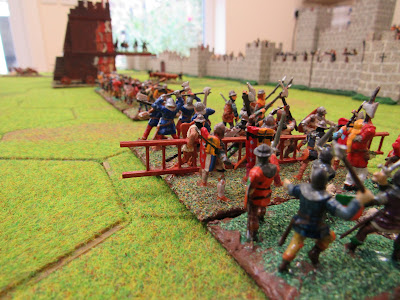 Just looking at the table I don't see how the attackers can lose, but I shall have to wait to see how the rules for ladders etc actually work in practice. To be continued - eventually.

* For those that know me well, on this occasion it wasn't actually 'the usual'.