It's been over a year since The Heimatdamisch, and Conny Kreitmeier in particular, featured in the blog, but I'm glad to say that she's back. 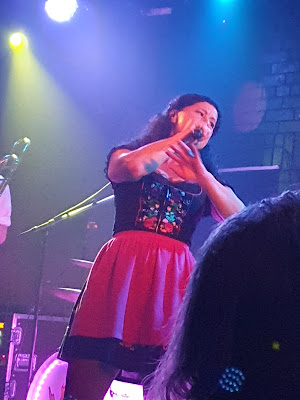 Apologies for the poor picture quality, but I took it on my phone in the Brudenell last night, the second date of their first UK tour. They were billed as 'the ultimate live party band' and judging by the way they were received by the packed and diverse audience there was some justification in that. For those who don't know Leeds, the Brudenell is bang in the middle of the main student area and one easily can see why the band might appeal to that demographic, and indeed why Conny plus half a dozen blokes in lederhosen would attract those whose taste runs to a bit of camp. Both I and my companion for the evening thoroughly enjoyed ourselves, although she did make one or two remarks about my obvious admiration for Bavaria's finest pair of lungs. Their repertoire ranges from AC/DC to Taylor Swift; here's the latter (for the avoidance of doubt this isn't West Yorkshire):