And so to the opera. I have been to see 'The Original Chinese Conjuror' by Raymond Yiu who, along with librettist Lee Warren, was at the performance, which formed part of this year's Left Bank Opera Festival. 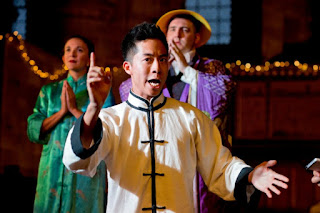 Just to be clear, the protagonist of the opera is the not very Chinese at all chap lurking at the back of the photo. The story is that of Chung Ling Soo, real name William Robinson, an American of Scottish descent whose masquerade as a Chinese magician lasted for almost two decades without exposure (to the public at least), until he literally died on stage, and forgot himself sufficiently to expire in English. His father had been a blackface minstrel, and one could imagine all sorts of complex psychological reasons for why the family had a compulsion to impersonate other races; on the other hand perhaps they did it for the money.

I really enjoyed the piece, which musically was an effective mixture of the styles of Kurt Weill and Benjamin Britten. And despite sitting rather close to the front I was still unable to work out how the handkerchief turned into a rose and the rose into a walking stick, let alone how he managed to sing in tune at the same time. The ending contrived to be very moving despite the fact that we all knew what was going to happen, and also that the man firing the gun for the don't-try-this-at-home catching-a-bullet-in-your-teeth finale had clearly never seen a rifle before in his life.

There's an interesting discussion of the opera's inaugural production at the 2006 Aldeburgh Festival to be found here.