I forgot that I had taken some photos of the Malesov game, so here's one at random:


James' suggestion - and I know that you have been waiting for it - is to allocate the Victory Medals unevenly, with the warwagons getting the bulk. In order to win therefore the Imperialists will be forced to attack the wagenburg directly; historically accurate and tactically foolish. The sensible thing for me to do would be to try the idea out immediately, but naturally I won't; Varna is a different sort of battle.

One of the practical problems we encountered was the tokens sticking together in the bag as they were being drawn. This is no reflection on Warbases, but is rather due to a dodgy bottle of varnish that I had, which I applied after painting the backs to differentiate the various sets. I have therefore decided to try a different solution, namely Scrabble type plastic tiles: 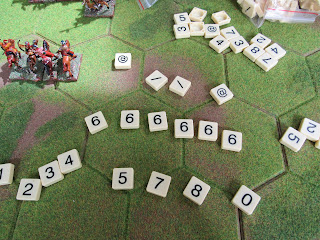 As you can see the set includes a couple of symbols. I have some plans to use those for some scenario specific rules. The sixes and nines are distinguishable, but not easily without standing them side by side. Here's one bag's worth after judicious application of Sharpie pen. 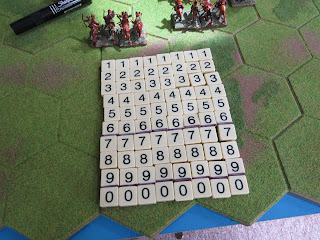 Email ThisBlogThis!Share to TwitterShare to FacebookShare to Pinterest
Labels: Hussites, Ottomans, To the Strongest!