These are some notes regarding the scenario which has been set up in the annexe for the last month. As I think I mentioned before, one problem with playing the period is that Zizka always won, so this is less an attempt to refight the battle and more using what little is known about events to form the basis of an interesting game.

Zizka is trying to reach the castle of Malesov, which is in friendly hands, but is being pursued by Imperialist forces. He draws up his wagenburg on top of a hill and ambushes his pursuers by rolling his supply carts filled with rocks down the slope against the middle battle.

Scenario details:
·         Before the game starts the Hussites get two attempts to hit on 6+ against each unit in the ambushed battle; normal saves and rout tests apply.
·         The Imperialists move first.
·         The Hussites objective is to reach the castle, by exiting their forces off their side of the table through the road square or those either side of it (NB any units leaving the table via these squares cannot return; any units leaving the table via other squares can return as per normal rules (see p42)), while at the same time inflicting some losses on the Imperialists. In addition to gaining Victory Medals for enemy units destroyed they also gain one VM per unit leaving the table as per their objectives. Victory conditions are:
o   Hussites              20
o   Imperialists         15
·         The true cross (*) can move for free with any unit or commander in its square or it can be activated to move on its own by Zizka as per normal infantry rules except that it has no facing. It can co-exist with any number of friendly units and can interpenetrate freely. It acts otherwise as per the rules for standards (ES V6 p5) .
·         If Zizka dies or the true cross is captured then rout tests must be taken as if a unit had been lost.

Terrain:
·         River is impassable, but is no impediment to shooting
·         Normal bridge rules (p29) are designed for both rivers and bridge occupying whole squares, not marking the boundaries between squares and so do not apply; instead
o   The square either side of the bridge is normal terrain
o   Only one unit can cross the bridge on each activation i.e. no whole square or group moves; march moves are allowed
o   crossing the bridge is a difficult move
·         Defending against anyone coming across the bridge +1 to saving throw in melee 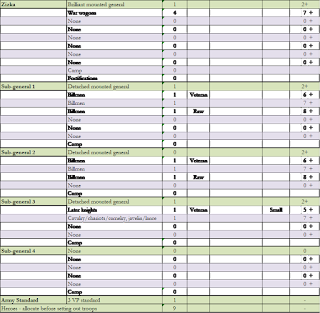 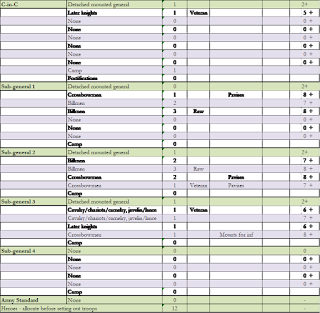 (*) I claim no great expertise in theology, but it seems pretty unlikely to me that the Hussites would have venerated relics such as the 'true cross'. However, I wanted to give them a standard to reflect their resilience and, to be honest, the true cross is all I've actually got (for those paying attention, it's  another resin model from Valdemar). While I'm on the subject of historical accuracy, I made the standards with geese on them many years ago under the impression that the Hussites used them because it was a play on words - in Czech - on Jan Huss' name. I now think it far more likely that goose was a term of abuse used by the Catholics to taunt their opponents based on the same pun. But I'm certainly not replacing all those flags, especially when this is the first time in about ten years that they have seen the light of day anyway.
Posted by Epictetus at 10:20

Email ThisBlogThis!Share to TwitterShare to FacebookShare to Pinterest
Labels: Hussites, To the Strongest!