"I learned to play the instruments of war, and paint in blood." - Cassandra Clare

There has been a bit of a conversation between the Don and me about Bill Boorer, which I wouldn't bother with unless you are especially keen to know who said what to whom in our home town forty years ago. Indeed possibly the most interesting thing about it is that he spells the name of the place as one word, whereas I have always favoured two.

However, it reminds me to tell you what happened to the print of a Strike Wing attack that I bought. You will recall that when it arrived it was clearly too large to fit comfortably in the annexe. Having been framed - at great expense - it has been sitting propped up in my living room. After staring at it for a while I have come to the conclusion that it is too large to fit in any sort of aesthetically pleasing way in the house itself. It has therefore, physical constraints notwithstanding, been hung in the annexe after all. I have no doubt that it will feature in due course in photos, looming out of scale over the tabletop. It has subsequently been joined on the wall by a thankfully smaller picture to provide a bit of balance. The only thing the two have in common is they both relate to periods that I don't actually game; perhaps that's the start of a theme. 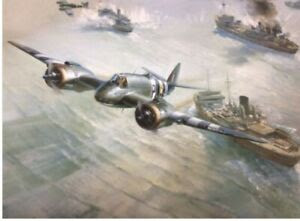 The recent outbreak of modelling continues, but hasn't progressed beyond making markers and game aids. Still, one can never have enough of those and so I thought I would make some bead-carrying pins of the type often seen in photos on James' blog. Not only did this involve once again struggling with the lightweight filler, but also the use of superglue. Regular readers will know that for some reason I have never been particularly competent with the stuff; indeed I mainly use the UV hardened alternative instead these days. In this case I thought that the assembly line type process involved meant that superglue was more suitable, but still wasn't surprised when I found a piece in progress attached to my hand. I was somewhat more disconcerted to find that it wasn't because of a chemical bond forming between skin and copper, but rather because I had impaled myself on a carpet tack. By the time these things get used they will have been covered with acrylic burnt umber, but for now one of them is a tasteful reddish-brown.
Posted by Epictetus at 13:10