Tonight, Matthew, I am going to be W.H. Auden

And so to the theatre. I have been to see 'The Habit of Art' by the very much alive, alive, oh, Alan Bennett. This production features David Yelland and Matthew Kelly. You may recognise the former as an actor (he was the Prince of Wales in 'Chariots of Fire' - the Nazi sympathising one, not the chap who speaks to plants) more than you do the latter. However though Kelly is perhaps best known for lowbrow television that was always by way of a diversion from his career on stage (*). He trained with Richard Griffiths, much esteemed by this blog and a frequent actor in Bennett's plays and films, indeed he was the originator of the part played here by Kelly. 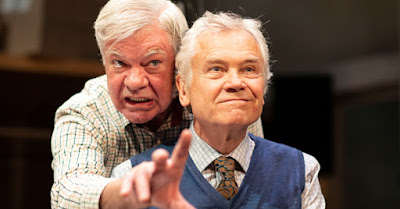 The play is, of course, very funny and very clever; certainly too clever for me to be able to give much insight in to what it's really about, beyond the imaginary meeting portrayed between Auden and Britten in Oxford some thirty years after they fell out and stopped speaking to each other. The nuances of gay identity examined are somewhat beyond me, although I did get the impression that Bennett is more sympathetic to Auden's more straightforward approach to trade than to Britten's penchant for young boys. There was some discussion of 'Death in Venice' (astonishingly Thomas Mann turned out to be Auden's father in law; much of the surprise obviously coming from the idea of him having been married in the first place) and the judgement on the composer's intention was somewhat harsher than mine. Bennett also finds time, via a play within the play, to poke fun at actors. This mise en abyme - in which the fictitious meeting takes place - is called 'Caliban's Day' reflecting Auden's apparent view that the end of 'The Tempest' could have been improved. Interestingly the way that Bennett chooses to end his play is with what is essentially a quote from Macbeth. 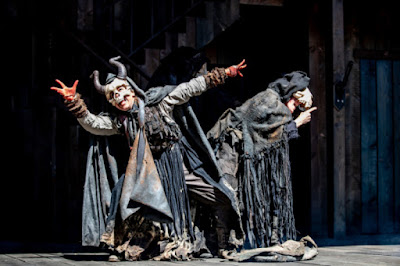 I know it's from Macbeth because I've just seen that as well. I saw the remaining three plays at the pop-up Shakespeare's Rose in York. As well as the Scottish play these were A Midsummer Night's Dream and Romeo & Juliet. I and the elder Miss Epictetus, on holiday from university at the moment, rather enjoyed them all, although the critical reaction elsewhere was mixed. The place didn't have as much atmosphere as the Globe, but I rather enjoy standing up to watch Shakespeare. If I have criticism it would be that they staged the full version of each play; there is undoubtedly a good reason why an edited text is normally used.


(*) I had only seen him once before, giving his Malvolio to an audience that seemed to consist entirely of me and several hundred convent schoolgirls. It was disconcerting even for someone of my experience and sang froid, but at least I didn't have to queue for the toilet during the interval.
Posted by Epictetus at 17:08