"H.M.S. Electra attacked through the smoke, and was seen no more..."

-    From the first communiqué of the Battle of the Java Sea, February 1942

'Terse, though moving' is how that epitaph is described on the dust jacket of H.M.S. Electra, a monograph on the ship by the most senior officer to survive its sinking. The words have an additional resonance for me, because I can hear my mother saying them. The death of her elder brother during the war wasn't spoken about much at home, but I can remember once asking her what she knew about it and that's pretty much what she said: "They went through the smoke and no one ever saw them again". At the time of course, I didn't know where the phrase came from.

My recent involvement in helping someone to learn the details of her godfather's crash into, and rescue from, the North Sea got me thinking about all the stories that were lost because the generation who fought the war preferred not to speak of them, a train of thought which led inevitably perhaps to the uncle I never knew. A little bit of research led me a book of whose existence I was previously unaware, certainly none of my rather large family ever mentioned it. My one remaining aunt is very old and lives on the other side of the world; I doubt that I shall trouble her with the subject. The style of Lieutenant-Commander Cain's book is somewhat dated - much of which is presumably due to ghost writer A.V Sellwood; although the latter was a distinguished naval correspondent, back in the days when there was a navy big enough to warrant such things, and I think we can rely on the accuracy of the background colour - but it's a fascinating, sobering story. 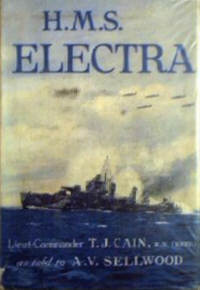 I don't know when my uncle joined the ship except that it must have been before it made its final trip to the Far East, but Electra, an E-class destroyer, had an astonishing two years or so of involvement in the war. Within hours of the outbreak of hostilities she was first on the scene following the sinking with no warning of the Athenia, a liner with over a thousand civilian passengers on board and the first British ship to be lost. She escorted Ark Royal during the carrier's operations against the German invasion of Norway. She was the ship that picked up the only three survivors from H.M.S. Hood's crew of 1,400; Cain is especially good on the ten minute period between the excitement of receiving Hood's signal: "Enemy in sight. Am engaging.", and the shock following that from the Prince of Wales: "Hood sunk". Electra was senior escort on the first arctic convoy following Hitler's invasion of Russia, but was spared further such trips when, and this is still prior to Pearl Harbour, she was ordered to Singapore. She was with the Repulse and Prince of Wales when they were sunk by Japanese aircraft, left Singapore as the Japanese crossed the causeway and then formed part of the Allied (Dutch, British, US) fleet essentially wiped out over the three days of 27th February to 1st March trying to head of the invasion fleet heading for Java. 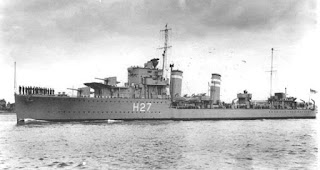 Cain's description of the battle itself is brief, and his summary of the Electra's solo, and suicidal, attack on the whole Japanese fleet in order to buy some time for the stricken cruiser Exeter is a phlegmatic as one would expect. In his eyes, and one suspects also of all his crewmates, they were simply doing what had to be done. His account of his escape, rescue, and subsequent sinking again are longer, but he understandably declines to speak at all of his years as a Japanese PoW.

So, a fascinating and, for me especially, somewhat emotional read. I feel very grateful that in this case someone took the time to document their memories. A less happy postscript is that the Electra is one of the ships which despite being designated war graves have been badly damaged by illegal salvagers recovering scrap metal.