There has been a little bit of debate in the UK recently about whether it's appropriate for able-bodied actors to take parts where the character is disabled. I tend to start from the premise that acting is about pretending to be someone else, and would prefer to see the discussion focus on whether disabled actors should be regularly offered the chance to play characters where having a disability or not is irrelevant. I mention this because I have been to see 'The Merry Wives of Windsor' and it occurred to me that no one has ever campaigned for the role of Falstaff (*) to be restricted to fat blokes. So it was that David Troughton donned a fat suit and waggled his codpiece in the face of unsuspecting theatregoers, causing everyone to enjoy themselves almost as much as he did. Troughton is of course the son of the Second Doctor; perhaps only those with two hearts should be allowed to portray Time Lords.

I have also been to see 'Othello', and find myself on this occasion taking the view that it is only appropriate for the title role to be played by black actors. This could be hypocrisy, although I prefer to see it as an example of Niels Bohr's definition of a great truth, one whose opposite is also true. The Moor has to be black and Desdemona has to be white.

The only way a white actor could play it is to black up, and to do that carries such offensive overtones that it is unthinkable. It is worth pointing out that the same logic in reverse applies to every other part in the play. If a touring company turns up in town performing Shakespeare for a night or two one must assume that the piece is one of this year's set books, and sure enough the place was full of schoolchildren. I always think that adds something to the atmosphere; it's more of an event for them than it is for jaundiced old gits like your bloggist, they have studied the work, they get more involved and they react more strongly. Having said that, Epictetus leapt right out of his seat at Othello's final gesture; despite knowing what he was going to do I didn't see it coming as it were.

I didn't much care for the National Theatre's version of Strindberg's 'Miss Julie', which was updated to include similar racial overtones to Othello and by so doing lost any sense of drama. In the original the daughter of a 19th century Swedish aristocrat has an affair with a servant with tragic consequences inevitably arising from this challenging of society's strictures. In this production the spoilt 21st century daughter of a wealthy man has a quickie with her father's black chauffeur, cue a collective shrug of 'so what' from the audience and no rationale at all for the play's ending.

Coming back to disability, Sandi Toksvig's 'Silver Lining' features a character in a wheelchair - played on this occasion by an actress who was certainly able to rise for her bow at the end - but also contains some very well written and realistic older people, noteworthy enough in itself. As anyone who has ever seen Ms Toksvig would expect it also has a lot of very funny lines. Similarly funny, but sadly featuring a very badly written older person was 'Party Piece', wherein a woman appeared to be at least fifty years older than her son. Noel Coward's 'Private Lives' was also very amusing and the characters were exclusively middle aged. And, as my companion for the evening observed when I sought her opinion afterwards, they all needed a good slap; hard to disagree really. 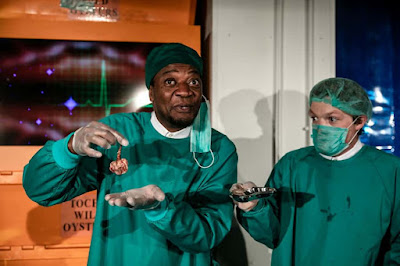 Which only leaves one more play seen in September, the very odd 'War with the Newts'. This was a totally immersive experience, with us all - audience and cast - in what was decked out as the hull of a ship; indeed all the audience except me had to sit on upturned oyster crates; I got a chair for reasons which were never explained, although I did get the word 'Leading' stamped on the back of my hand, which may or may not have something to do with it. It's based on Karel Čapek's novel, which I haven't read (and, let's be honest, am never going to either) and I sort of assumed as it went on that the human race would learn its lesson and after the many early disasters would become wiser and be able to rebuild civilisation, but better this time round. However, somewhat disconcertingly the newts won, and mankind was wiped out; the science fiction equivalent of us all getting the good slap which we no doubt deserve.


(*) A completely irrelevant piece of information that I can't resist sharing with you is that it was once seriously suggested that the SI unit for the rate of flow of a liquid should be named the Falstaff.
Posted by Epictetus at 18:59