A woman walked into a shop to buy a parrot, a beautiful blue-and-gold job, and she said to the man, "How much?", and he said, "Twenty quid".
She said, "Twenty pounds? But he's so beautiful."
The shopkeeper said, "Well, I have to be quite frank with you, he's got a bit of history. He was in a brothel and, to put it delicately, he's got quite an extensive vocabulary."
She said, "I'll take a chance on that", took the parrot back to her flat, took the cover off. The parrot looked round her flat and said, "New place. Very nice".
Two daughters walked in. The parrot said, "New place. New girls. Very nice indeed."
And her husband walked in, and the parrot said, "Hello Keith."

Firstly, thanks to all those who have wished me bon voyage. As you can see I haven't actually gone yet, but have filed it all away for when I do. I have been doing the usual: wargaming, opera - you know the score by now. But if readers will excuse me breaking this blog's strict no namedropping rule (and if those overseas will excuse me writing about people they will never have heard of), I shall skip the usual rubbish and tell you about my lunch with Barry Cryer. 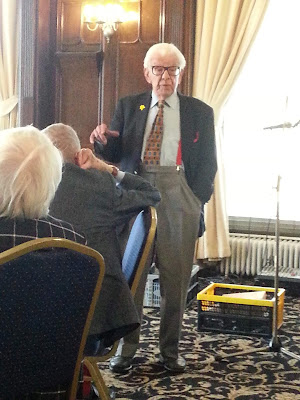 He was in reflective mood, having been to Denis Norden's funeral the previous day, but still immensely amusing. One of his books is entitled 'Butterfly Brain' and he seems to free associate from one anecdote to another, all which are not just funny in their own right, but remind him of jokes as well. He obviously doesn't operate a no namedropping policy because he managed to mention pretty much everyone in post war British show business; indeed, as he had a Vera Lynn anecdote, make that wartime as well. Tony Hancock, Morecambe & Wise, Bruce Forsyth, Peter Sellers, Les Dawson, Alexei Sayle, even Bernard Manning; I could go on - or at least I could if I had taken any notes. Those who know his work will be relieved to hear that he told several parrot jokes, including the one above.

His presence in Bradford, and the reason for the lunch, was because he is hosting the J.B. Priestley session at this year's Ilkley Literature Festival. He was a friend of the great man from the mid seventies, which in itself is somewhat unexpected when one first learns it. What I hadn't known before, and found even more surprising, was that it came about in part because JBP was a big Monty Python fan, and that Cryer first visited him in the company of Graham Chapman and John Cleese.

By the way, as there is a namedropping amnesty, for completeness let me tell you that the chap in the grey suit whose back can be seen in the photo above is Austin Mitchell, the broadcaster turned Labour politician. The last time I had lunch with him was many years ago, when he was still an MP and we had gone to hear Hans Blix speak about his experiences searching for WMD in Iraq.
Posted by Epictetus at 19:33