Meantime we shall express our darker purpose

A while ago I saw a broadcast of Sir Ian McKellen's recent 'King Lear'. It was, of course, superb (Sinéad Cusack played a female Kent - I know you like to hear about the cross gender casting), but it was also very long. It started at 7 o'clock and the interval was at ten past nine. A fair number of punters never made it back afterwards. I stuck it out on the basis that if he could do it on stage at his age then I could certainly do it in the audience at mine. The reason for mentioning all this is not to dwell on my numb bum, but because I feel that it behoves me to pass comment on the current omnishambles of a government that we have here in the UK. I find I can do no better than quote Gloucester speaking in that play: "Tis the time's plague, when madmen lead the blind". 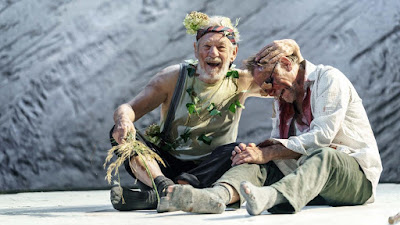 It has seemed apparent to me for some time that we are living through is actually a worked example of the Condorcet Paradox. My recent viewing of 'Twelve Angry Men' obviously brought to mind Condorcet's Jury Theorem, and so I sought out a cheap second hand copy of Szpiro's 'Numbers Rule' an interesting book dealing with the mathematics of democracy. I have to confess that I hadn't previously recognised that the balloting system used by the Richard III Society to allocate tickets for the re-internment of a somewhat later lord of Gloucester in Leicester Cathedral - a process which you will recall left me without an invitation - looked suspiciously like one described by Plato in his 'Laws'; yet another reason to dislike the man.

Let's finish with a qualitative rather than quantitative take on democracy:

"The theory of democratic government is not that the will of the people is always right, but rather that normal human beings of average intelligence will, if given a chance, learn the right and best course by bitter experience." - W.E.B. Du Bois