I have mentioned before that I find coincidences interesting, but I am am obviously aware that they don't really signify anything. The brain looks for patterns (especially if one is as analytical by nature as me); if it doesn't find anything it moves on and makes no note; if it does spot something then it says "Aha", or "Would you believe it?" or "Bugger me" according to taste. And given that we are in November 2018 it is also no coincidence that I have seen another play about the Great War, this time a new production of "Barnbow Canaries", which I first wrote about here. It's still funny, still sad and still relevant. I suspect I was the only member of the audience trying to shoehorn the play's message into one of two competing interpretations of the relation between state and capital and I can't pretend it added all that much to my enjoyment. The play is about the sacrifices demanded by total war as viewed through the sufferings and solidarity of women, and to any sensible person that would be enough. 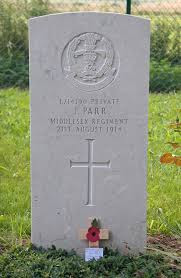 What definitely does count as a coincidence is the close proximity in the St Symphorien Military Cemetery of the graves of Private John Parr, the first British soldier to die during the war, and Private George Ellison, the last such. The juxtaposition comes about because Mons was where the BEF first sought to delay the German advance and was also where the British had themselves reached again by the time of the armistice. The irony of spending four years and millions of deaths to get back to where one started needs no elaboration from me. On Friday the British Prime Minister will lay wreaths on both their graves; we shall have to wait to see what lessons regarding how to conduct relations with other countries that she chooses to draw from her experience. 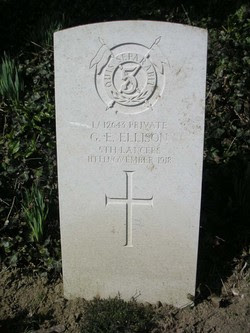 Private Ellison, who was already in uniform when the war started and had served throughout, was from Leeds and yesterday (understandably a little earlier than the centenary itself because Sunday will be a very busy day for all concerned) was locally honoured with unveiling of a plaque in a short ceremony attended by members of his family and representatives of the successor regiment to that in which he served.
Posted by Epictetus at 10:23