There hasn't been very much gaming recently, and certainly no wargaming since Ravenna at Fiasco, the result of which escapes me for a moment. Someone has been concerned enough about this state of affairs to ask me when I intend to spend this money supposedly burning a hole in my pocket, and on what. The answers, as you had probably already guessed, are not yet and don't know. Firstly, I haven't actually been paid yet and I stick closely to the accountants' maxim: Cash is Queen. Secondly, well, too much choice. Spending at Fiasco was some Hexon slopes from Kallistra and some trees from the tree man; basically the same as at every other show ever. The boat has been pushed out very slightly since though. I have settled on To the Strongest! as my rules of choice for both Early Roman Empire and for the various 15th century dabblings that I do. Figures for the former are individually based and I acquired movement trays quite a while ago. The latter are all on 40mm square bases and the size of the table, and consequently the squares, mandates three stand units. I have therefore bought some 120mm x 40mm sabot bases to make movement easier, plus a few 160mm wide for units with attached commanders. Painting (green) and varnishing (gloss) is under way.

Boardgaming has more or less stopped completely as I have found both the groups which I used to attend becoming cliquey and off-putting; it seems it is no longer enough to like playing games, one must like playing the games that are, by some mysterious collective decision, determined as being currently fashionable. A cynic - that would be me then - might suggest that having paid a lot of money for a game on Kickstarter is the main criterion for whether a game is so deemed. Which brings me on to about the only game that I have actually played recently. I was invited by a regular five strong gaming group to make up the sixth player in Quartermaster General: Cold War, which one of them at least had funded. I have raved on here often enough about the World War Two game, plus this new game covers a conflict through most of which I lived myself, so I was definitely up for it. The format will be familiar to those who have played/seen the other games in the series (although naturally there are sufficient minor rule differences to catch everyone out) and the first thing to say is that, as with the games for the two World Wars, the card decks do a fantastic job of capturing the essence of the political, military and indeed wider cultural events that we all remember or have read about according to age. In fact I would go so far as to say that it makes a brilliant three player game. Sadly, as mentioned before, we played with six players, which didn't work at all. The mechanism for dividing competing blocs into teams of two players each positively detracts from the gaming experience, not least by making the bloody thing last for ever. So, highly recommended for playing with three players, despite me never having done so. 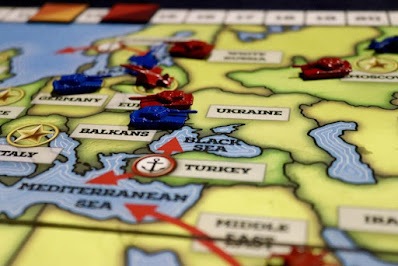 The once a month Sunday afternoon group to which I used to go is changing venue this weekend and I was wondering whether to give it another try. The likelihood of me doing that increased significantly when I discovered that the new location has a pinball machine. I spent almost as much of my time as an undergraduate playing pinball as I did table football; in other words, a lot. I used to own a pinball machine: a proper, old-fashioned, heavy thing, stuffed full of electro-mechanical relays, with plenty of satisfying heft when you gave the flippers some welly. I bought it from a man I met in the pub. In my experience no story that starts with those words is ever likely to end well; this one certainly didn't.
Posted by Epictetus at 09:51